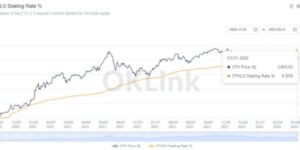 Beijing, China – The OKLink team has released the Global Crypto Market First Quarter Report 2022 on April 10, which contains a thorough review on the market performance of various public blockchain as well as in-depth discussion of popular fields and topics in the first quarter.

According to OKLink data, MicroStrategy is by far the largest holder of bitcoin amongst overseas listed companies. It has been hoarding bitcoin since August 2020 and held a total of $5.8 billion worth of 129,218 BTC by the end of the first quarter of 2022, an amount even more than the market capitalization of MicroStrategy itself and three times the position that a certain automobile company held.

OKLink: Preparing for a prosperous multi-chain era as Ethereum 2.0 is drawing near

For now, Ethereum ecosystem has the most dynamic and viable players of all public blockchains, yet its high Gas fee and network congestion has always been denounced, which results in its decision on moving to 2.0 stage in order to thoroughly solve the congestion on-chain and improve the scalability of the Ethereum blockchain.

Here the core change is the transformation from PoW algorithm to PoS algorithm. And 2022 is a crucial year for Ethereum’s plan on 2.0 phase, which could set the stage for Ethereum to become a world-class financial settlement layer and DApp infrastructure.

Staking of ETH is a key step in Ethereum’s transition to 2.0. According to OKLink data, more than 10 million ETH have been staked to ETH 2.0 contract. To be more precisely, as of March 31, ETH 2.0 contract has received a total of 10,989,186 ETH, which accounts for 9.3% of total ETH in circulation. This could be a sign that we may soon see an Ethereum that has greatly improved in scalability, security and sustainability.

In addition, several EVM (the core underlying component of Ethereum) based ecologies such as Polygon and Fantom rose up to popularity as they promise a lower cost compared to Ethereum

OKLink emphasized in the report that Non-EVM based public blockchains would provide new options for users to move their assets by adding EVM compatibility; besides, this would bring more composability to the global blockchain ecology and accelerate the prosperity of the multi-chain era by integrating widely accepted standards.

For more information on the report, please visit:
https://www.oklink.com/academy/zh/hot-oklink-quarterly-insights-q1