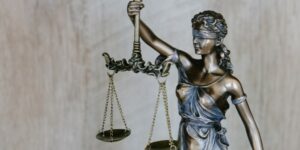 Access to justice is an integral part of the rule of law. People need to have access to courts and guaranteed legal representation; otherwise, the law may not achieve its objective of enforcing people’s rights and responsibilities effectively.

According to the United States Institute of Peace (USIP), access to justice is the ability of the people to seek and find a remedy for their grievances through a formal or informal institution of justice and in a way that complies with human rights standards. The USIP also argues that access to justice comprises several elements, including legal protection, awareness of rights, legal aid and counsel, enforcement, adjudication, and oversight from civil society.

The justice gap refers to the divide between the legal needs of a people and the available services. The greatest implications of the legal gap are largely felt by the most vulnerable populations such as people of color, women, the elderly, immigrants, people with disabilities, and the LGBTQ community. According to the Center for American Progress, these groups are more likely to live in poverty.

In civil law, such as workplace discrimination and property law, the litigants must hire their attorneys. This only widens the divide between those that can afford to hire a lawyer and those who cannot. While a person is entitled to legal representation when facing criminal charges, people who cannot afford a lawyer are at a disadvantage because a court-assigned lawyer may not be as effective as a hired one.

“There is a big difference between white-collar cases, misdemeanors, and serious felony cases within criminal law. The biggest part of this determination is finding an attorney with whom you are comfortable and who you feel you can trust. However, this is difficult for those unable to afford legal representation,” says criminal lawyer Kush Arora.

Making justice accessible to all Americans will require a multi-faceted approach from all players in the justice system, from the courts, Congress, and state governments.

Making Justice Accessible to All

The courts are responsible for assigning legal representation for individuals facing criminal charges who cannot afford an attorney. Unfortunately, sometimes the court-assigned attorney may lack the motivation or experience to fight the defendant’s charges, causing the accused to lose the case. The judges can solve this problem by exercising due diligence when appointing lawyers to represent defendants by ensuring they assign best-suited lawyers based on a defendant’s charges to prevent such a scenario.

Where an individual is navigating a civil case and can’t afford an attorney, the courts can help make it easier for litigants by educating them about their rights and other case elements. This can be provided by giving litigants access to justice technology, such as educational applications. This way, unrepresented litigants can have an easier time navigating the justice system alone—awareness of rights and the law surrounding a given case is an element of justice access.

Congress and state governments also have a role in making justice more accessible by creating laws and allocating more funds to the justice system. According to the American Bar Association, the greatest challenge facing assigned counsel systems is underfunding, which ultimately results in understaffing, making the already big justice gap even wider.

How You Can Bounce Back After a DUI Conviction