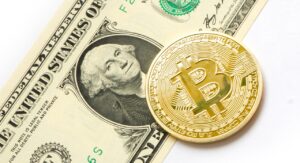 You may believe that the Bitcoin craze has already passed you by. It’s understandable why you would think that, considering that there have been constant news reports circulating about how high the value of the coins has risen and how the people who invested in it early are reaping impressive rewards from it now. That all may be true, but that only tells part of the story. The idea that Bitcoin, the technology that allows people to make digital transactions without the need of any overseeing institution to act as arbiter or overseer, is a dead end is a fallacy that can actually cost money in terms of lost investment opportunities.

Bitcoin is still an extremely viable option for a strong investment portfolio, one which actually has as much if not more room for significant growth than most other popular assets. Many people are still finding out how lucrative it can be, whether diving into that world themselves or investing via a crypto trading program such as Bitcoin Code. Here are just a few of the reasons why Bitcoin still seems like an investment that you should definitely be considering to improve your personal wealth.

1. The Story Hasn’t Yet Been Told

What that heading means is that many people are under the assumption that Bitcoin enjoyed a great rise, fell back down a bit, and is now settling into a bit of a rut from which it is unlikely to escape. Yet there are other scenarios in which Bitcoin still thrives. One is where banks and credit card companies realize the public demand for such a democratic financial instrument and start to incorporate it into their businesses. The other, the even more, exciting prospect is if people push for Bitcoin to the extent that those financial institutions are the ones who find them becoming obsolete. In either case, the value of Bitcoin can still explode.

2. Taking Part of The Whole

Many people are now scared off of Bitcoin because the price has risen to a level where investing in even a single coin has become somewhat prohibitive. But you should realize that you can also buy fractions of Bitcoin, which will help mitigate the initial cost and still give you the opportunity to grow your money if and when the price goes up even higher.

If you’re still worried about the price and being overexposed to Bitcoin, you can still profit from its rise without actually buying some. Many investment firms are now including products for average investors where you can speculate on the price of Bitcoin without actually buying into it. If nothing else, the fact that these major firms are doing this speaks to the legitimacy of Bitcoin in the financial world. And it gives you the opportunity to get involved without getting in too deep.

Bitcoin shouldn’t be dismissed by you because of a few overhyped news stories. Stay with it and you’ll find your financial health improving because of it. But always do your homework and find the best option for your needs, no investment is without risk.

Academic Writing in Israel Innovated by the IDC Writing Center