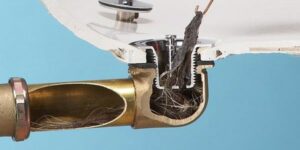 In the especially brutal winters that Toronto is sometimes host to, it is especially crucial that homeowners keep the drains clean, clear, and well maintained by a professional drain cleaning service. When pipes are clogged in freezing weather, not only does the water freeze within the pipes, so does whatever is causing the clog, which can be an especially annoying and costly mess during the winter months. Contrary to what many people may believe, even minor clogged drains can cause serious problems to the plumbing system, which is why it is very important that homeowners enlist the help of a professional plumber before the problem worsens, so the problem be fixed as quickly as possible.

Along with the obvious mechanical problems that can arise when plumbing issues are not taken care of promptly, there is the problem of gray water, a nuisance not often though about. Gray water is filled with harmful bacteria, which pose a great health hazard if the water backs up and drains out onto the floor or into the sinks. If you’re like most households and plan to host a few people for dinner of a gathering over the winter, it’s imperative you keep the number of emergency drain cleaning services handy, just in case something goes horribly awry.

Clogged pipes aren’t the only problem that a homeowner can face. When rainfall hits hard, there is also the problem of a flooded basement. A basement that has suffered from flood damage can be a breeding ground for dangerous mould and other forms of rot, and if the basement is ruined, it can also virtually negate the sale of the home (that is, if the homeowner wants to get rid of it). There should be a waterproofing system already in place before the rain hits so that flooding doesn’t even have a chance in the first place. Again, contact a professional for something like this, and try not to put it off – the sooner your house is waterproofed, the better chance it has of staying dry.

When a plumbing issue arises in Toronto, it usually does not happen at a convenient time. For some reason, doesn’t it seem like all major plumbing accidents happen in the middle of the night, at the absolute least possible convenient time? Any plumber worth his salt knows that a 24-hour emergency service is needed – accidents do not keep banker’s hours, so a reliable plumber cannot either, which is why it is important to have a 24-hour plumber programmed into speed dial before disaster hits. That way the clogged drains can cause as little of an inconvenience as possible.

Homeowners in Toronto and the Greater Toronto Area should make sure to seek out their options as part of their moving-in checklist. There are few things that can cause panic, a foul mood and a foul odour quite like a serious plumbing emergency, whether it’s due to severely clogged pipes or unexpected flooding. Preparation is key to the solution.