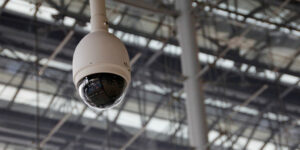 Our security and peace of mind are as important as ever. Americans all across the country are seeing the effects of a new world where everything is connected and anyone can find anything. But, with such convenience comes a new worry.

Today, we worry about our computers and phones, and our identities and homes, and these worries are amplified by news of major companies facing security breaches. The thinking goes, “if it can happen to Sony, Equifax, or Microsoft it will happen to me!” Increasingly, concerned citizens and businesses alike are searching for new and improved ways to secure their personal belongings and enjoy some safety and comfort.

There are key differences between physical security in corporate America and your home. First, it’s important to note that the nature of threats to your home is significantly different from that which may strike big business.

Commercial video surveillance security systems, which are increasingly leveraging cloud and hybrid cloud solutions, are designed to monitor threats from capturing individuals on camera to granting quick and verifiable identification capabilities in the event of toxic spills or the outbreak of a fire. These systems come in large and small packages to meet the needs of both large, sprawling offices and smaller family businesses.

Malicious attacks in particular require separate approaches. Burglars in residential neighborhoods seek out unguarded, easy targets. They look for the usual cars absent from driveways, mailboxes collecting letters, and lights that never turn on. Unlike the targeted break-ins which plague offices, home burglaries have traditionally been crimes of opportunity, but how do we begin to address the shift as more people work flexibly – bringing their work (and even office equipment) home with them?

The Tools You Need

One security measure stands above its peers: the security camera. It has gained a lot of buzz as of late and is much simpler to install and monitor than you might think. Many homeowners choose DIY solutions to security problems, but these are time consuming, blindingly expensive over time, and are often far eclipsed by commercial options available.

The common thief is looking for low hanging fruit, and, as Ronda Kaysen of The New York Times points out, with only 17 percent of homes boasting a security system in 2017, the trees are ripe. However, home camera systems offer a simple remedy that can raise your home’s footprint, causing a would-be burglar to look elsewhere. A home outfitted with sleek, low profile cameras is a strong deterrent for a thief looking for an easy score. It’s one of the quickest, most effective measures a homeowner can take in securing his or her property and valuable belongings.

A tool you may not need for your home, but is practically essential in commercial environments, is robust security software meant to help personnel filter through hundreds of hours of footage and cameras more easily. With more space to cover in a commercial setting, the ability to quickly surface relevant information when needed can help surveillance tools become more actionable.

While commercial security systems have traditionally been incredibly cost prohibitive, over the past few years new players have been entering the market offering robust AI-supported security solutions at a fraction of the cost. Among remote commercial video surveillance providers there are companies geared towards commercial markets, but simple and cost effective enough to be setup and deployed by almost anyone from c-level security personnel to individual managers as franchise locations. These systems provide the robust features necessary to manage commercial environments, but the plug-and-play user-friendly interfaces that have made so many B2C solutions successful in recent years.

How Security is Changing

Both homes and businesses benefit from advances in high-tech surveillance technology. In home use, security cameras have become incredibly accessible to the average consumer when paired with smart devices. We’re seeing a rise in the use of surveillance-enabled doorbells, and none of the need for traditional wires or recording devices. In business, advances in data security have similarly made large, expensive infrastructure obsolete. In years past, an office manager would require a central terminal dedicated to surveillance. In addition, the office needed to install a host of other costly devices to establish a secure network to broadcast video streams to remote terminals. Once completed, these systems introduced a new set of obstacles.

Older surveillance required new employees schooled in the operation and maintenance of switches, NVR devices, security measures and port configuration. The IT infrastructure knowledge required far surpassed the average office manager’s technological know-how. Modern systems operate over a secure internet connection, closing data security gaps at their source by eliminating them altogether. They also give the user a live image of the scene without any added hassle.

This is important because businesses are less susceptible to random crimes. Burglars often target particular businesses for specific assets. It is therefore of the highest importance that businesses maintain robust and straightforward defenses to activities that would hinder or cripple operations.

What Features do Customers Expect from a Hotel Booking App?