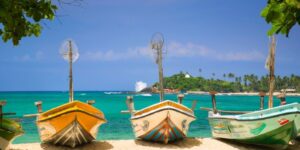 They say Sri Lanka is the most beautiful country on the world. A smiling sun all year round, golden beaches, beautiful waterfalls, ancient cities, exciting safaris, colorful culture, adventure sport and lovely peoples. A wonderful mix of modern towns and rural villages, there are star class hotels and boutique villas spotted around the country as the Sri Lankan tourist and travels sector is booming following the end of the civil war in 2009.

The palace is located in the heart of the island between the towns of Dambulla and Habarane on a massive rocky plateau 370 meters above the sea level. Sigiriya rock plateau, formed from magma of an extinct volcano, is 200 meters higher than the surrounding jungles and villages. Its view human imagination, the fortress complex includes remnants of a ruined palace, surrounded by an extensive network of fortification, vast gardens, ponds, canals, alleys, and fountains.

Considered Sri Lanka’s largest botanical garden, with 147 acres and over 4000 species of plants, Peradeniya Botanical Garden is a well-known attraction in Sri Lanka. The lush garden estate, also referred to as the Royal Botanical Garden is famed for its collection of 300 species of orchids. Within the delightfully landscaped greenery, visitors will come across numerous birds including endemic species like the Yellow Fronted Barbet, Layards Parakeet, Sri Lankan Hanging Parrot, Brown Capped Babbler and number endemic reptiles as well as 18 species of mammals. Among the 10,000 or more trees found in the park, are the Giant Bamboo of Burma, the century old giant Javan fig tree, the Cannonball tree and a range of exotic palms

As the oldest stupa in Sri Lanka, Ruwanwelisaya is considered to be an icon of architectural glory in ancient Sri Lanka. Ruwanwelisaya, rising with its glory in the city of Anuradhapura, tops the list among Buddhists’ sacred places. It was built by King Dutugemunu in 140 B.C. His name is written in the annals of Sri Lankan history as a great king who stabilized the contemporary nation bringing all the communities under one flag. Ruwanwelisaya bears witness for his incomparable service to revive Buddhism in the country. It is located just a short walk away from Maha Bodhi tree in Anuradhapura. Buddhists all over the world worship this stupa as majorly of Buddha’s relics are enshrined in its core because of its gigantic construction with the height of 338 feet and circumference of 950 feet, Ruwanwelisaya is considered to be one of the world’s tallest monuments.

Lovely Arugam Bay, a moon-shaped curl of soft sand, is home to a famed point break that many regard as the best surf spot in the country. It’s a tiny place, with a population of a few hundred, and everything is dotted along a single road which parallels the coast. If you’re not a surfer, there are plenty of other draws: beachfront guesthouses, ocean side restaurants and a mellow, swing-another-day-in-a-hammock kind of vibe that’s totally removed from the brash west-coast beach resorts. Arugam Bay also makes a great base for several adventures in the surrounding hinterland. During the low season (November to April) things get extremely quiet and many places close altogether, but it can also be a serene time to visit, with few tourists and verdant landscapes.

This popular attraction is one of the widest waterfalls in Sri Lanka. Measuring 25 m in height, this cascading waterfall is glorious to watch during the rainy season. The falls, located just off the Ella – Kithalella Road, are a part of the Ravana Ella Wildlife Sanctuary and were named after the legendary King Ravana of the famous Ramayana epic. It is told that King Ravana, kidnapped princess Sita and kept her hidden in a cave located behind the waterfall. Tourists often visit the Ravana cave, which is a major tourist attraction in the country.