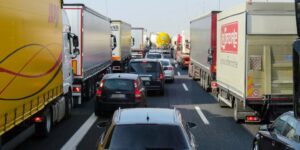 Do you know over 1.9 billion gallons of fuel are simply wasted on road congestion in the States? Well, modern American roads are defined by clunky traffic congestion these days and as per the traffic congestion stats, the capital city ranks the highest (74%) in the topmost congested cities in the US- followed by Chicago, LA, Houston & New York. A congested traffic severely hampers a smooth traffic flow and is a prime factor abetting risks of accidents. It’s a busy world today that hardly spares us time to wait forever in traffic, forcing one to speed up in panic which has unfortunately spiked up the number of car crashes of late. However, contemporary tech advancements in the automobile and traffic sector seem to be promising enough towards a smoother and safer traffic management in near future.

Talk about evolution of technologies in traffic management and ITS is the name to reckon with. This in-vehicle computer works to integrate the transportation infrastructure, the vehicles as well as the users for better management of transportation issues. It shares real-time information with traffic police, transport authorities, transport operators, fire departments, service providers and travelers so that they can bring forth the most efficient collaborative approach in crisis situations, just in the nick of time.

It is designed to collect & transmit data on transport-service schedules for the travelers before & during the trips. Its Trip Planning System would direct public & visitors through intermodal treading routes, extending them the desired data to reach their destinations safe and sound. The more futuristic ITS systems would be able to sense delays and hazards and the information would be passed on to the travelers to bypass risks of accidents and inconvenience. Besides, it aids to lessen congestion issues by slashing down on proportion of unwanted traffic incidents and clearing them quicker while they occur, assuring easy re-route of traffic flow.

This is one of the highly potential technologies when it comes to improved traffic management. The satellite-based VPS (Vehicle Positioning System) would pass on the necessary knowledge on road-incidents to the motorists so that they know the very affected roads to avoid to bypass congestion woes. In fact, VPS would also let the bus passengers know about timing of next bus.

It has been found that 94% vehicle crashes happen due to human errors and distracted driving is one among them. But then, it’s a “mobile” world today where we have to stay almost glued to our phone screens every now and then for calls, notifications and messages. You simply can’t avoid your phone while driving when you get an urgent call from your angry boss and it’s natural to get engrossed in pacifying him – yet in the meantime you might not notice that the traffic has already slowed down before you. Such a situation is highly likely to make you bump on the car in front but Forward Collision Systems come as a rescue here. The FCS technology banks on radar to sense the gap which is fast closing on vehicles before you & it automatically takes the control of car, preventing a possible crash just on time.

Speculations are also on about an extremely intelligent driver assist system that can read driver’s body language to fathom the next action of the driver and take corrective action if needed.

Narendra is a writer, blogger and a father of two lovely daughters. He is passionate about helping people from all walks of life to get the sufficient knowledge. He also manages several websites and blogs, such as thelifestyleis.com. He can be followed via Twitter at @logicseo