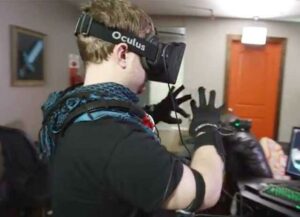 I’ve said it over and over again, I’m a big fan of VR and AR and just about all of the myriad ways we have created to experience alternative realities. Stories, songs, drawings, dreams, hallucinogens, books, radio, movies, television, surround sound, first-person shooters, heck even the stereoscopic Viewmaster 3D could all be considered ways to enhance or augment our otherwise seemingly mundane world.

Each of these technologies have their places in the pantheon of ways we can change our perceptions and experience things that aren’t necessarily real. And I assume that eventually we will be able to step into a holodeck-like room and find ourselves in in a Venusian nightclub surrounded by space pirates and aliens.

But, as the release of the Oculus Rift looms ever closer (and hints about overall costs nearing $1,300 for a headset and system capable of running it) I still have doubts about the viability of VR.

It’s no secret that people have been working on VR technology since the early 90’s and dozens of companies have tried to market devices of all shapes, sizes, quality and prices – none of them survived.

There are many reasons why VR never took off.

Awkward, heavy, uncomfortable helmets (that look a lot like the Rift by the way) was one of the reasons. I don’t think Oculus has solved that problem with their new device.

Lack of software was another reason. Just about every failed VR device came with at most one or two mediocre games and that was it. Hundreds of developers did not rush in to write VR games or any other applications for that matter. Maybe the rules have changed in the past 25 years but until there is a market for VR games I still don’t think developers will spend the time and money developing them.

High prices was another very big limiting factor in the adoption of VR and at $1300 Oculus still hasn’t solved that problem. Sure there are some hard-core gamers out there that would be more than happy to spend that kind of money for what is essentially a fancy game display/controller, but those are the kind of people who demand the highest quality games that deliver a great experience. I don’t think there will be dozens of highest-quality titles available when the Rift ships.

Finally, all the hype around VR muddied the waters. Not wishing to sound like the only thing VR is good for are games manufacturers talked about educational applications, uses in medicine, manufacturing, training simulations and the like – but they never managed to deliver any of those things. The result was that people weren’t entirely sure exactly what VR was good for.

So I don’t think the Oculus Rift has solved any of those initial issues and I’m not convinced it will succeed in the real world.

The Hateful Eight Gets a Date