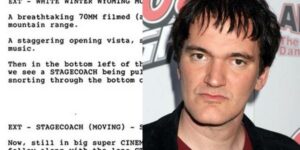 While there’s been a lot in the press lately about Quentin Tarantino’s latest, one thing that wasn’t official until now is the movie’s release date. There was a previous date, but it apparently wasn’t confirmed, so for those who can’t wait for his western, it will be unleashed onto the world on…

This isn’t the first Tarantino movie that was released on Christmas, Jackie Brown and Django Unchained came out on Xmas as well, so now the real question is how will it hold up against the 800-pound gorilla of the season, Star Wars, which is coming out on December 18.

Other movies coming in December include the remake of Point Break, Concussion, starring Will Smith, and Oliver Stone’s Snowden. The Hateful Eight, like Django, is a western, and like Reservoir Dogs, it largely takes place in a room. As we just reported on TG, a number of theaters are being redone to include film projectors that can play 70mm celluloid to play the movie, much like theaters were rebuilt for Dolby Stereo when Star Wars was released in 1977.

Doctor Strange Has Its Villain