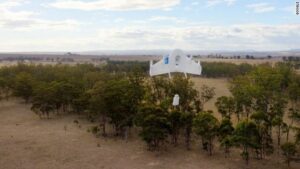 Google’s advanced research labs, Google X, wants to do an Amazon and is prototyping 5-foot-wide drones for personal delivery services. Project Wing was used to bring treats to man and dog to two farmers in Queensland, Australia, earlier this month. They brought cattle vaccines and water and radios, too, according to the WSJ, but you know that ultimately all drones will just deliver pizzas mostly.

Bearing in mind that commercial flights by drones is expressly banned by the FAA in the US and that there is a lot of unanswered questions about danger and privacy, why the big rush into drones?

Well, the way the tech industry gets its way these days means that in the years it takes for drone systems to be fully developed the regulations will undoubtedly change. And, Google, much like Amazon, is into what its founder, Larry Page, calls “moonshot” projects.

And Google puts its money where its giant mouth is as it eats up the universe. The company hired Nick Roy, an associate professor of aeronautics and astronautics at MIT, in 2012 to head the drone project at Google X.

But, really, do we need to have this race to the skies? Are we so desirous of a future of giant mechanical flies buzzing around our neighborhoods dropping gifts from the sky?

When did we become so damn inept at doing things for ourselves? I mean, I get the convenience thing. I also get the fact that if drones can replace the postal service, UPS and FedEx it means big bucks to the drone operators.

I even get the fascination with the technology issues and the regulatory hurdles. It’s fascinating and challenging.

By all mean, drone away in Queensland, Australia, or across the Gobi desert, but leave the urbs and the suburbs alone. Get off your fat asses and pick up your own pizza or eat out every now and then.

Take your time. Enjoy the journey. Drones are not a technology issue but a social and cultural one.

How fast can you clone an app?