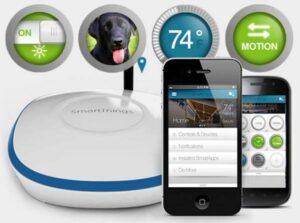 Never has there been so much activity around stuff that can control your lights and smoke alarms at home. While Google has Nest and Apple has HomeKit, Samsung hasn’t had much to answer with. Now, it looks like they have a foot in the door with this acquisition.

Is this just going to mean a bunch of conflicting standards or greater innovation? Who knows but here’s hoping that the competition among these multinationals will push prices around for the consumer. Because, none of this stuff is cheap enough for the average consumer.

SmartThings is in the home automation space, and allows you to connect devices like lights and doorlocks to a system controlled by your mobile phone. It has raised over $15 million from investors including Greylock, Highland Capital, First Round Capital, SV Angel, Lerer Ventures, Yuri Milner’s Start Fund, David Tisch, A-Grade Investments, CrunchFund* and Box Group.

Samsung most likely bought the startup to get out ahead of Google’s Nest efforts. With this buy, Samsung obtains a mature home automation platform that just needs some marketing help. And Samsung has a hefty marketing budget.

The larger arena at work here is the millions of connected devices that will populate our world — commonly referred to as the internet of things. In a nearly inevitable future where every device in our home has a live connection to the web, and can be controlled by our devices, device manufacturers are the ones most uniquely poised to offer holistic solutions to consumers.

Jibo the robot: your friend through the world of IoT