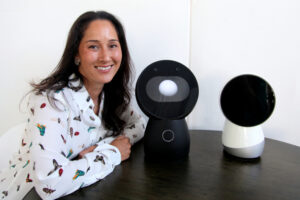 Could robots bridge the gap between people and the Internet of Things (IoT)? With the promise of everything in our lives communicating with each other and our world becoming a mass of data that has to be corralled, controled and managed it may be that robots our own only hope to make sense of it all.

How many remote controls can you really have and do you really want to be jumping in and out of apps to make your life work for you? Probably not.

Jibo, the robot and startup, wants to give us an “emotional” companion to guide us through the IoT world of the future. Check it out for yourself in this promo video:

Siri has a voice, but does little to convince us that it is more than a computer talking. Jibo, the first robot by a Cambridge, Mass., startup with the same name, is built to bring a body and voice to our electronics.  CEO Cynthia Breazeal, who is also director of the Personal Robots Group at MIT Media Lab, put years of work in social robotics into Jibo, resulting in a device that is meant to hit us exactly where we are most human: our emotions.