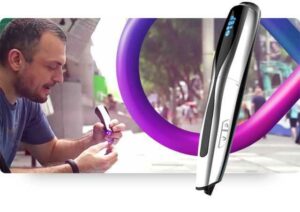 CreoPop is a hand-held 3D pen that uses photopolymers that solidify when exposed to UV light. The company has already exceeded their Indiegogo goals and should be ready to ship the product in March 2015.

The cordless CreoPop pen is unique in that unlike other 3D pens it does not use melting plastic to create objects. Instead it uses light-sensitive photopolymers so neither the pen or the ink becomes warm. The inks don’t contain any toxic material, they are environmentally friendly and don’t emit any unpleasant or dangerous odors.

But one of the coolest things about the CreoPop is the variety of inks you will be able to use. Right now the company has plans to ship nine different types of inks in various colors.

The standard ink comes in five colors with more colors in the works, there is a glow-in-the-dark ink, an ink that changes color depending on the temperature, inks with different aromatic scents, body pain ink, glittering ink, elastic ink that stretches, magnetic ink (think refrigerator magnets) and even a conductive ink if you want to draw your own circuit boards.

The company is also planning to come out with different nozzle shapes.

According to the company’s Indiegogo.com page:

CreoPop packs the full power of 3D printing with light-sensitive photopolymers into the small size of a portable pen. In contrast, other 3D pens on the market, melt ABS or PLA plastic to around 250 degrees Celsius (482 Fahrenheit). While such pens might be fine for use in a garage or in a lab, for home use this seems dangerous – and certainly not okay to put in a child’s hand.

Unlike the rest of the market, CreoPop has no hot parts, no melting plastic and no unpleasant plastic smell. Instead you can focus on the creative applications and possibilities of what a 3D pen can do.

While most people probably won’t be able to sculpt 3D masterpieces with CreoPop (it looks like it’s a bit tricky to use for detailed items) it certainly looks like it would be a fun little gadget for kids (or adults) to play with.

The company doesn’t say what the expected retail price will be but based on their contributor rewards the CreoPop will probably sell for about $100.

You can find their Indiegogo page here.