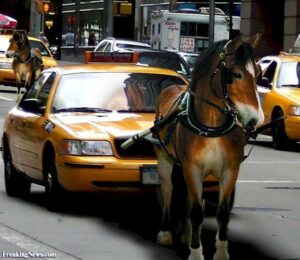 The Virginia Department of Motor Vehicles wants to be counted among the cities (and now states) who believe the taxi industry is good and ride-sharing is bad. The Virginia DMV has just issued ‘cease and desist’ orders against Uber and Lyft. Their justification was “Virginia law requires for-hire passenger carriers to have proper operating authority,” and the two ride-sharing services apparently don’t.

An article by Kathryn Watson posted on the Watchdog.org website says that the state is currently reviewing its passenger carrier laws and DMV Commissioner Robert Holcomb told Uber and Lyft they should “focus (their) resources on participation in this study rather than continue illegal operations in the meantime.”

Christopher Koopman, program manager for the Mercatus Center’s Project for the Study of American Capitalism at George Mason University said, “These sorts of actions, they privilege existing firms and they stifle innovation and they limit consumer choice. In situations like this, regulations are being used to block the development of promising situations, products such as Uber that are market responsive, in a lot of ways, to issues that consumers have faced in the past. In a lot of ways firms like this pop up to respond to needs of consumers, and regulations act as barriers to entry. They make it more difficult and they make it more expensive for the entrepreneur or the innovator to provide higher quality services at a lower cost to consumers.”

Matthew Freeman, policy analyst with the Cato Institute. “I think the technology that allows Uber and Lyft to work actually helps customers when it comes to things like safety. For example, Uber allows not only for the customers to rate drivers, but it also allows drivers to rate customers, which makes it safer for drivers and better for customers.”

You can read Kathryn Watson’s full article on the Watchdog.org website here.

Battles like this are popping up all over the world. Taxi drivers in London, Paris and Spain have been holding protests that border on riots trying to ban companies like Uber and Lyft, primarily because…well, basically they don’t want any competition. They are happy with the status quo, thank you very much, and don’t want to improve their service simply because someone else can do their job better than they can.

Garmin is dedicated to runners