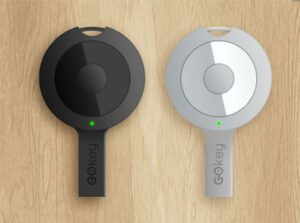 One of the most successful crowdfunding projects on indiegogo.com is GOkey. They’ve already raised nearly $430,000 more than their original $40,000 goal and the reasons are fairly obvious – it’s a cool little device that clips to your keychain and it comes with just the right combination of features.

The GOkey acts as a battery to charge your phone, Micro USB/Lightning charger/synchronization cable, memory stick with 8, 16, or 32GB of flash memory and it can locate your phone or keys if you lose them.

The company says that the battery inside GOkey can hold enough juice to keep your iPhone or Android phone going for about two hours. The battery charges whenever the device is connected to a computer’s Micro USB or Lightning port.

When connected to a computer a retractable cable can be used to charge a smartphone in the usual way and after the phone is charged the GOkey will charge its own internal battery. It can be also be used to synchronize your playlists or transfer files between your device and computer.

The GOkey also comes with either 8, 16 or 32GB of flash memory so you can store files, music, pictures or whatever. You can even lock the files to protect them if you loose the device.

Oh yea, one last thing. If you want to know if the GOkey’s internal battery is charged you can simply shake the device three times and its light will go green, orange or red depending on its energy level.

GOkey pricing is expected to be $69, $79 and $89 depending on the amount of flash memory and they are expecting to ship the devices sometime at the end of this year.

Seems like there are dozens of smartphone-enabled chargers, memory sticks, health monitors, backup batteries and what-nots popping up these days which I suppose is a side effect of our increasingly mobile lives.

Obviously as the GOkey crowdfunding success shows, if you can press the right smartphone accessory buttons a lot of people will support you.

An electronic nose for your smartphone