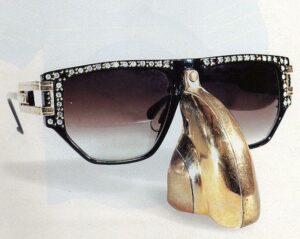 A crowdfunding project on indiegogo.com called PERES should be bringing an electronic nose to a kitchen near you by the end of this year. The company has developed a portable sniffer that can detect gasses emanating from beef, pork, chicken or fish that indicate the food has gone bad.

The PERES device has built-in sensors that can detect minute amounts of volatile organic compounds (VOCs) key indicators of decomposition. It can also sense temperature, humidity and ammonia levels. By detecting and then transmitting the data to a smartphone or tablet via BlueTooth or mini-USB cable and letting the app crunch the numbers you can get a quick idea if your beef is bad, your pork is past its prime, your fish is fishy or your chicken has flown the coop.

According to Augustas Alesiunas, CEO of PERES, “The World Health Organization (WHO) states that more than 200 diseases are spread through food, and one out of three people living in industrialized countries may be affected by foodborne illness each year. After experiencing food poisoning myself, I have decided to create a device that would help me and my family easily check the freshness and quality of our food, and PERES was born.”

When they start shipping sometime near the end of the year the device and app should be available for both Android and iOS devices and cost somewhere around $150.

While there are only a few days left on their indiegogo campaign the company has already surpassed their original goal of $50,000 by raising over $70,000 and I imagine they’ll end up with more than that.

As we reported a few days ago there is a similar product called SCiO on the way that uses a spectrum analysis approach to detect freshness in foods (all sorts of foods in fact) plus it can analyze other things like drinks, medications and gemstones.

However, I think there is probably room for a bunch of different products like these. I can only assume that the PERES folks will be working on expanding the capabilities of the device to include other types of food. Perhaps someday they might even come out with a version that could be used by law enforcement types who want to sniff out explosives or drugs. There may even come a time when a device like this could be used to detect illnesses in people that cause slight changes in the chemical composition of our sweat.