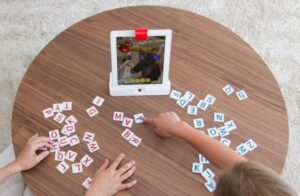 Tangible Play, a Palo Alto-based company is trying to launch a new iPad-based learning system called Osmo. The twist is that Osmo lets students interact with actual, physical objects while the iPad watches and offers instructions.

It’s a fairly simple idea really. A small prism-shaped mirror is clipped onto the iPad’s camera so that it points down at a table’s surface. As kids draw, write or move objects around, the iPad watches what they are doing and can offer suggestions or visual rewards if the child follows instructions successfully. The target market is children ages 6 and up.

The company is in a self-hosted crowdfunding phase at the moment and is looking to raise $50,000 by offering investors who chip in $49 the iPad hardware and three games. The first three games include a puzzle game, spelling game and a drawing game.

The system was originally intended for gamers, not as an educational tool but Pramod Sharma, one of the company’s co-founders said, “My goal was to build a Nintendo sort of company, not an education company.”

But when Sharma and his co-founder, Jerome Scholler, showed it to a friend of theirs several months ago to see how her children would react, she immediately suggested taking it to schools. Soon they were testing Osmo in a half-dozen local schools and now the system is in more than 100 schools.

Educators see Osmo as a tool for social-emotional learning, a concept based on the idea that teaching children to manage their feelings will lead to improved performance in both their academic and professional lives.

Osmo seems pretty cool and I don’t think it will have any trouble finding its way into schools across the nation as soon as it hits the shelves (possibly as early as this summer). And perhaps some enterprising developer will actually create a Nintendo sort of game for it some day.