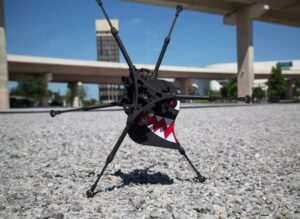 While flying drones maybe the current techno-flavor of the day, Robotics Unlimited is trying to crowdsource a project on Kickstarter featuring a different kind of robot. The OutRunner doesn’t fly or even lumber around like Robbie, it runs. And the little bugger can run up to 20mph!

OutRunner is the world’s first legged running robot that the company Robotics Unlimited hopes to bring to market by 2015. The OutRunner has some cool capabilities such as self-balancing, running up to 20 mph on almost any types of terrains (grass, asphalt, dirt, etc.,) can run for up to 2 hours on a single battery charge, has a built-in camera, can be controlled with a controller or smartphone, can be configured with different numbers of legs, is extremely simple to operate and it’s even upgradable. As the company says, “There is simply no other robot with such capabilities and so easy and fun to play with.”

If you want to find out how it works the company Kickstarter page says, “OutRunner robots are biologically-inspired; they emulate the behavior of legged animals by reproducing their step pattern and having a similar mass / length distribution. By having a center of mass lower than the leg axis of rotation, OutRunner robots exploit a buoyancy effect, making them inherently stable and eliminating the need for expensive sensors and complex control algorithms. Energy efficiency is achieved by exploiting the same feature observed in legged animals; using legs as an energy storage system allows for fluctuation and conservation (and not losses) of potential and kinetic energy during running. Steering is achieved by shifting the center of mass of the robot, forcing it to lean to one side, which in result induces a turn (similarly to what happens on a bicycle).”

If that sounds a little geeky it’s because the group that invented the OutRunner is a spinoff of the Institute for Human and Machine Cognition (IHMC) where a team of scientists and engineers have been working for years toward the development of walking and running robots.

OutRunner is expected to come in two versions: Core and Performance. The core version is able to run up to 10 mph and has an battery life of 1 hour. It is controlled via a standard remote control. The robot has 6 legs and is equipped with a Universal Camera Mount (camera not included, 1/4″ thread). This version is about 1.5 foot tall and weighs a little bit less than 3 pounds.

OutRunner Performance comes in several designs and is equipped with a powerful brushless motor. The Performance version is able to run up to 20 mph and can run for up to 2 hours. The robot comes with 12 legs and will be able to run with 6, 8, 10 or 12 legs. It is controllable via a remote or smartphone. It is also equipped with an accelerometer and gyroscope, and an onboard High Definition camera (720p, 30fps). Sensor data and video are streamed live to your smartphone via WiFi. Hardware and software upgrades will also be available. The robot is slightly taller than 2 feet and weighs about 5 pounds.

No pricing numbers have been announced yet but investors in the project could get up to $400 off the retail price.

If you want to check out some videos of the OutRunner running hither and yon go to their Kickstarter page here.

Google Translate will soon be able to read signs