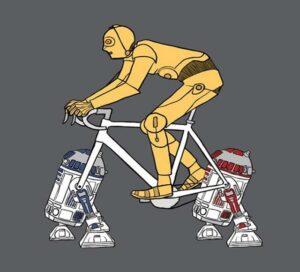 The Vanhawk Valour may be the smartest bike on the road when it finally begins shipping. It features a carbon-fiber body, built-in wireless and even sonar. It can give you directions (indicated by lights on the handlebars). It can also track distances and calories burned and even sense and track things like bad or closed roads.

There’s also an ultrasonic sensor in the back that watches for things entering your blind spots. When it detects something, the handlebar on the side where the object is gives a little buzz.

The bike is packed full of electronics and communicates wirelessly with Android, iOS and the Pebble smartwatch apps for your smartphone.

The cheapest Valour is expected to run about $1,100 and there will be a fixed-gear as well as a version with an internal gear hub. The final bike is also expected to have integrated front and rear lights as well.

And to keep that smart bike safe riders should be able to pick up a Skylock high-tech bike lock from Velo Labs.

The Skylock is a hardened steel U-shaped bike lock but that’s where the similarities to traditional bike locks ends. This bike lock features plenty of tech beginning with a solar powered battery. Velo Labs says just one hour of sunlight gives users enough power to last a week and a fully charged battery should last a month for most users.

“As a former engineer at Boeing, I have spent years working on tanks, helicopters and aircrafts, and while these forms of transportation have made huge leaps in safety and connectivity the bike is still stuck in the 19th century,” Velo Labs co-founder Jack Al-Kahwati said in a statement. “We wanted to take on the challenge of bringing cycling into the future.”

A built-in accelerometer can be used while the bike is in motion to detect if the rider has been in an accident. Using Bluetooth and WiFi, the bike can sync with a bicyclist’s phone while riding and in case of an accident it can message friends or emergency responders. That same accelerometer can sense if someone is messing with your ride while you (actually if your smartphone) are not nearby.

Skylock works with an iOS or Android app installed on the user’s smartphone. Users can use their phones to lock and unlock their bikes, add other users, and modify the settings to receive alerts if their bike is jostled while out-of-sight.

The company is raising crowdfunding startup funds on their website and backers will be offered a pre-release price of $159. The anticipated retail price will be $249.

You almost have to wonder if there is a limit to how many smart devices we can have going at the same time. It’s going to be fun to see what smart tech finds its way into dumb devices next.