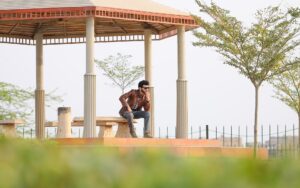 But that doesn’t mean there are no hope for the rest of us. In fact looking “pretty” or “good” is a rather achievable goal with the right outfit, diet and exercise plan. Seriously, you have no idea the wonders those three things can do to your looks and confidence.

The discussion about if looks matter or not have been waring on ever since the dawn of man. Back then we just had more important things to worry about such as food, survival and killing a grizzly bear.

We are the cause for where we are now and how our society has evolved. There is no denying in that.

So to answer the age old question: Does look matter?

Alex Wise, dating expert and CEO of loveawake.com dating site says“looks don’t matter unless you want to become a fashion model and be on the covers of magazines, while doing the catwalk on weekends.” He would know: he’s been helping single people find love online since 1994.Alex says: “Then yes looks do matter in the manner of a job description. You can look at companies such as Abercrombie & Fitch, which only hires “physically attractive” store attendees.However generally looks don’t matter when it’s about achieving a successful life. No excuses people.”

Have you never seen an average guy pick up a very attractive woman? Leaving you wondering what the hell she sees in that guy.Ever seen a guy who is physically unattractive but earns millions and have an attractive wife? Don’t you even dare say it’s all about the money.

To achieve success in any part of your life, looks are not a prerequisite for success.Hell some of the happiest people I know are considered ugly by fashion industry standards.There are countless of examples, where looks doesn’t have anything to say about the quality of life that you can achieve.

Now let’s take it back to ground level again.

You might be thinking “Oh if looks don’t matter, I can just start eating crap food, let myself go and just go to work in sweatpants”.

I hope for your own sake you aren’t that dumb., and if you are, don’t feel sad.

Appearances is what matters

Looks don’t matter but appearances do.Appearances means the way you present yourself to the world.Wearing a nice tailored suit says a lot more positive things about you than wearing a hoodie going to work.Even when going to classes, looking good does a lot for you, you don’t just get the positive reactions from people but you will also feel mentally sharp.

It might give you that slight advantage over others. Who look generic.But it will definitely make people take you a lot more serious than if you were wearing an old college hoodie.You are better than that. Stop accepting mediocrity into your life.

Don’t dress to impress — Dress to be your best

Looking good doesn’t need you to have a symmetrical face and all that conjured up nonsense.To look good, you first of all have to take care of yourself.If you are in bad shape. Hit the gym buddy.

If your closet is out of date. Get some new clothing pieces. For men, check the magazine GQ for fashion inspirations. They have loads of good advice on this topic, or just get a female friend who is fashion conscience to help you. Pick out a few good pieces of clothing with her. Seriously, it doesn’t take a lot too look good, or should I say appear good looking.Don’t forget eating healthy food. Throw the garbage processed food away and start eating clean healthy foods. I promise you just by doing that will change your life completely.

Appearances matters. If you can make someone believe that you are the greatest guy ever in what ever you do. Then that is all you need to succeed in life.However there is a slight mini trap that comes with this.When people figure this out. That they just need good appearances. They do exactly just that.They appear to be great. Without being so.

Appearances can be faked. We’ve all been aware of makeup’s amazing effects on the male side of the species.And boy don’t we get disappointed, when the woman removes a gallon of makeup from her face, revealing all the signs of years of heavy smoking, drinking, late night partying and tanning.

Because they ended up not being, who we thought they were.Appearing to be something you are not is only a short term solution.Actually being that person is something that takes hard work. But it comes with an endless amount of perks and satisfaction.

So if you are just starting out. You may have not done much in your life or you are simply in a rut.Begin to be your best. Do what is necessary to look and be your best.What areas do you need to take serious action to improve in. Then do exactly that.You might not quite be there yet, but as long as you appear that you are, you will get the perks from it.Just remember to keep striving to be your best. Not just appear that way.

Do not just be a pretty face with little to no content in. Do not be that guy.Truly be the best you. Start today and I can guarantee you that you will start feeling amazing within the first 2 weeks. I’ll talk about how you can be your best self and how that can be the key, for what you’ll get out of your life in another article.

What Type of Benefits Can You Get from Your Orthopedic Mattress