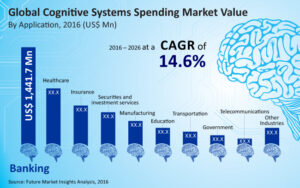 Diffidence of companies towards adopting cognitive computing and Artificial Intelligence (AI) platforms for improving their business efficiency will scale down in the years to come. Diverse industrial sectors will serve as a vast expanse for applicability of cognitive systems, attesting that smart and self-aware computing is no longer limited to IT and tech businesses. Few years ago, cloud computing was deemed with a similar opinion, where businesses were shying away from incorporating it. The momentum at which a key technological advancement such as cloud computing is proliferating several business verticals at the moment and ensuring a promising future of lucrative growth opportunities can be considered seminal for expanding cognitive systems spending operations across diverse sectors of industry in the years to come.

Efficient customer service is the pedestal upon which the global Banking, Financial Services & Investment (BFSI) sector grows at a vigorous pace. Cognitive systems are estimated to add to the efficacy of customer services offering by banking corporations. Organizations managing wealth of thousands to millions of customers can shell out sufficient capital on cognitive systems spending, which will eventually equip them with software and AI platforms that facilitate operations such as investment consulting, financial advisory, and banking-related decision making. In 2016, more than 20% of global cognitive systems spending revenues have been estimated to be accounted by the BFSI sector. The banking segment is expected to bring in over US$ 400 million in revenues for the global cognitive systems spending market by the end of 2026.

The insights presented in this article are based on a recent report by Future Market Insights. The excerpts of the report can be browsed at http://www.futuremarketinsights.com/reports/sample/rep-gb-2616

Top 10 Most Common System Errors And Their Solutions