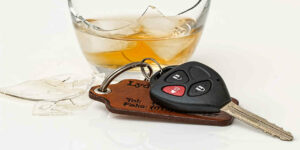 Car accidents caused by drunk drivers are serious crimes and could lead to fatalities. Drivers with a blood-alcohol content reading of at least 0.08 percent are guilty of a DUI. If they have controlled substances in their bloodstream, the officers will find these substances through blood testing. After they arrest the driver, the officers can conduct blood testing. When the accident results in bodily injuries, the drunk driver loses the benefit of the no-fault state laws, and the victim gains the right to sue the drunk driver for all their economic losses.

The Restrictions of a No-Fault Auto Accident State

With a no-fault state, auto accident victims cannot seek damages in a lawsuit unless they incur more than $50,000 in medical expenses or the at-fault driver breaks the law. The exception for law-breaking drivers helps victims seek damages when the accountable driver is guilty of a DUI. Drunk drivers cause serious injuries and fatalities by choosing to drive while intoxicated or under the influence of controlled substances. Accident victims can hire lawyers at Jacoby and Meyers after a drunk driver accident.

Why You Must Report the Accident

After an accident, victims should report the accident to law enforcement or they will never know if the at-fault driver was intoxicated or under the influence of drugs. If the accident isn’t reported, the victim doesn’t have information about the at-fault driver unless they get the driver’s license plate number. If they get the license plate number, the victim can report the driver to law enforcement and the officers will charge the driver with fleeing the scene of an accident when they find the driver.

What Happens When a Drunk Driver is convicted?

When a driver is convicted of DUI, the court could force them to pay restitution to all victims injured in the accident. Since the compensation is available through a different court, it won’t affect the victim’s ability to file a civil lawsuit against the accountable driver. Typically, if the driver is convicted of a DUI, they receive jail time, a driver’s license suspension, fines, and their vehicle is impounded. With a DUI, the driver could lose their driving privileges for a longer time because they caused an accident.

The Right to File a Lawsuit

The accident victim doesn’t have to wait till they accumulate $50,000 in medical costs. The at-fault driver broke the law by choosing to drive while intoxicated or under the influence of a controlled substance. The victim can start a legal claim as soon as they have medical records and estimates for their auto repair costs. It’s necessary for the victim to get copies of their medical expenses, too. If they lost any wages because of their injuries, they need documentation from the employer showing their wages and how long they’ve been out of work. Scheduling a consultation with an attorney allows the individual to determine if they have a viable claim against the accountable driver.

If a Victim Dies from the Auto Accident Injuries

After a drunk driver causes an auto accident, they are charged with a DUI and face additional penalties for causing an accident with bodily injuries. Even if the driver was convicted of the DUI earlier, the county could impose formal charges if the victim dies as a result of the auto accident injuries. The fatality upgrades the criminal infraction to involuntary manslaughter. If the accident victim wasn’t the other driver and the victim was a child under the age of 14, the individual would face aggravated DUI charges. The same classification applies if their blood-alcohol content reading was over 0.15 percent.

What Happens During the Civil Lawsuit?

A civil lawsuit helps the accident victim or their family seek compensation for medical expenses, auto repair costs, and lost wages. However, if the victim dies, it is no longer just a personal injury claim. It is a wrongful death lawsuit.

The state of New York requires an autopsy for all victims killed in an auto accident. The findings determine if the victim died because of their auto accident injuries or a different reason. In a wrongful death lawsuit, the family must prove that the at-fault driver’s negligence caused the victim’s death. With a DUI, this defines a substantial reason for a wrongful death claim.

For a wrongful death claim, the family can seek compensation for all medical expenses, funeral costs, the loss of financial support, and they could seek additional damages for pain and suffering. They cannot seek tort-based awards for themselves, for the surviving spouse, or surviving children. The pain and suffering claim must be for the victim, and their medical records must substantiate painful injuries that caused ongoing pain and discomfort.

Children of the victim could seek lifetime earnings for the victim if the deceased was the primary provider for the children. If the accident orphaned the children, the lifelong earnings are based on the individual’s age, life expectancy, and current wages. If the family wins, they could get all these economic losses and tort-based options for the victim.

Accident victims who were injured by a drunk driver must seek legal help fast. The statute of limitations for auto accident claims is three years from the date of the accident. For a wrongful death lawsuit, it doesn’t start on the day the victim dies. It’s urgent for the victim or their family to understand the difference in the timeline. All claims require medical records, invoices for medical costs, documentation for lost wages, and estimates for the auto repair requirements. Reviewing NY auto accident laws helps the individual decide when to file a lawsuit.

Why Washing Hands Has Become So Important All of a Sudden – Dr. Israel Figa Talks