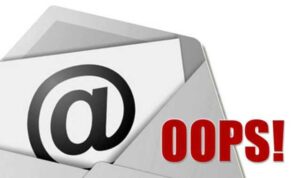 Email newsletters seem like a good idea on the surface – they keep your customers informed about new products, they keep them engaged with your company and in some cases can actually generate new sales. However, you should be extra careful about who gets your e-newsletters and what you are trying to promote in them.

About six months ago I needed to buy a new laptop (I tend to pound my PCs into the ground). I shopped around online, read the reviews and finally decided that I would get a Dell laptop. I then poked around looking for the best price I could get for that particular laptop with the configuration I wanted.

Then, just for the heck of it I decided to go to the Dell website to see if I might be able to get it cheaper directly from the manufacturer. I was wandering through their site comparing models and prices when a friendly popup window appeared asking if I would like to ‘chat’ with a sales rep. Well I did have a question that I couldn’t find the answer to so I said ‘sure.’

After I gave the sales rep my email address we proceeded to slog through a long and frustrating back and forth, time-delayed ‘dialog’ (I assume the rep was somewhere in India). As the minutes dragged on and I realized that I was never going to get my question answered I got so pissed off that I told the rep that I would find the answer somewhere else and signed off.

As soon as I closed the chat window another window popped up asking if I would be willing to give Dell feedback on my chat experience. I said ‘sure’ and proceeded to tell them, through a series of ‘rate the following’ questions, that the chat experience was horrible and based on that chat I was going to buy a different brand.

So I shopped around again and decided to go to a local Staples to see what they had. I found a nice Toshiba laptop (that I’m very happy with) and bought it from them. I also went to the Microsoft store to get a student version of Office (my daughter is taking classes at a local community college).

They all were trying to sell me something that I already had. Even as tough as I am on my computers I don’t need a new laptop every few months and I certainly don’t need to be reminded that if I had waited a few weeks I could have saved myself a hundred bucks or gotten a better computer.

All three of these e-newsletters are driving me farther and farther away from the companies that send them to me – they don’t keep me engaged with the companies and the more they try to sell me another laptop the less likely I will want to buy anything from them ever again.

So think about the content of your e-newsletters and who they are going out to. In most cases, if someone has already purchased one of your products don’t keep trying to sell them another one. And don’t promote special deals to these people because you will just build resentment rather than loyalty.

Highly-targeted ads may end up hurting all advertisers

The Flash is a Ratings Winner