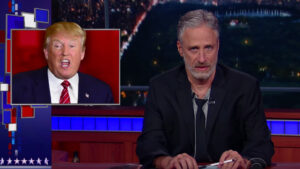 Jon Stewart and Stephen Colbert, at the latter’s Late Show desk, make for a laugh riot. Their political commentary began with their celebration of the resignation of sexual offender and chairman of Fox News, Roger Ailes. But what was funnier was Stewart’s vicious take-down of Donald Trump.

The conservatives just want Trump to give them THEIR country back because they feel that they are the country’s rightful owners. This country isn’t YOURS. You don’t own it. There is no real America. You don’t own patriotism. You don’t own Christianity. You sure as hell don’t own respect for the bravery and sacrifice made by the military, police and fire fighters.

The New Wonder Woman: More Than a Stereotype?

Comic-Con Gives Us a Glimpse of the U.S.S. Discovery