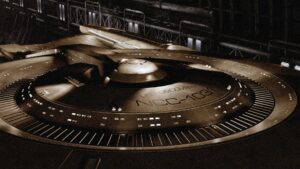 Star Trek is making a comeback to television after ages and will premiere on Netflix around the world in January next year. And today, the producers of the series unveiled the first look of the test flight of the U.S.S. Discovery, the newest Starfleet ship for the franchise, at San Diego Comic-Con International and it looks nothing short of glorious. The ship’s name will also serve as the official title for the highly anticipated new series Star Trek: Discovery.

You could take a peek here.