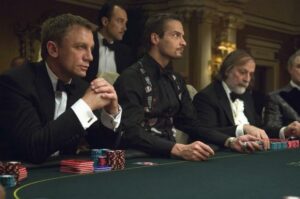 Any one who as ever visited a casino probably dreams of breaking the bank, which means winning all the money designated to a specific table for the night. Maybe the song about Monte Carlo Wells, “The Man Who Broke the Bank at Monte Carlo”, contributes a little to the hype, although it was nearly a century ago.

In modern times if there is anyone we could imagine breaking the bank it would be James Bond, as famous as he is for is his specific taste in Martini but nearly in every movie you see him suited up visiting a casino and challenging the bad guy, and somehow we associate roulette and winning to James Bond. There is even a winning “system” named after him, which brings us back to  our question – could James Bond beat a roulette wheel.

Nearly everyone believes they have found a way to win at roulette and there are lots of self-proclaimed professionals who claim to have found a system or strategy that will do the job.

Here are a few of the most common strategies.

The James Bond Strategy: Spreading your bets across the table (with a system of course), you just have the illusion that it works because you often win something when you have betted on over half the numbers but it doesn’t change the odds, the house edge stays unchanged.

Thinking something is “due”:  As mentioned above there is no statistical law that says after 10 times red there is a larger possibility that black will come, there is always a less than 50% chance that either black or red will come, don’t forget there is also the green zero.

One thing is for sure, there is no system Mr. Bond could use to increase the odds in his favor and beat the house. On a roulette table the odds are clear and no matter how you spread your bets the numbers always win, you just might be lucky that you win something using a strategy but that is all it is, luck.

Now this a completely different story, you can’t beat the numbers but could our hero, with the help of Q, predict where the ball is going to fall. There are systems being offered that claim to change the odds in your favor. These systems either use gadgets and computers or long observations to give a player a small edge over the odds.

Computers: Roulette is practically a ball spinning in one direction, a wheel in the other and at some point the ball falls onto a number. If you have the speed of the ball, the speed of the wheel and take into considering the bounce  you could calculate the approximate area where the ball will land. The predictions could actually increase a player’s chance of winning, but such devices are not welcome and even illegal in many places and second there is a very small time window between when a player manages to “predict” the next number, after the ball is released, where they can actually spread their bets and the famous “rien ne va plus!”.

Cross referencing: In this system, the player finds the relationship between the wheel’s physical attributes and the winning slot. This model is highly reliant on a cause and effect and accounts for all the changes in the variables.

This system accounts for all the physical variables in roulette and its role in identifying the winning number. Compared to roulette computers, the edge for this system is much lower and it could increase your winning odds by 5 to 15 percent but cannot be applied to every table.

This roulette system also happens to be one of the best especially when it comes to predicting the winning number before the ball is released. Unlike other methods, this system can also be used in online casinos and is legal.

Observation: Roulette tables are operated by people and just like poker where a player studies their opponent to try and read their hand from their habits and reactions, it is sometimes possible to recognize a pattern in the wa a specific croupier rolls the ball on a specific table. Even some wheels show a specific pattern, like a dominant diamond where the ball bounces more often than other diamonds.

All the above methods could theoretically increase a player’s chance of winning, minimally reducing the house edge, but they all require days of observation and calculating and cannot guarantee a win .

So now we know that James Bond could not beat a roulette wheel, maybe just increase his odds.

Review: LeEco Le Max 2 is a Content Powerhouse, But…