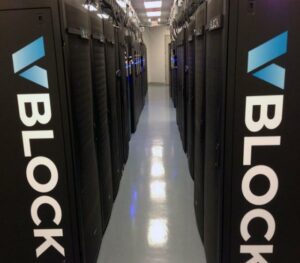 VCE is fascinating.  It started out as a joint project between VMware, Cisco, and EMC, and has now become a strategic division inside the EMC Federation in order to better provide a wider variety of choices and options for customers.

What VCE sells is basically a turnkey datacenter which has had a number if unique advantages not the least of which is the quickest time to value of any technology in its class.  This is because its products are created as integrated units. That’s very different than the more typical mix of separate components which come together when initially installed, then face a daunting and long process getting the resulting mess to work.

This is a term that gained a lot of traction as a concept early this decade but mostly was a pipe dream because the ability to connect all the different components just didn’t exist.  It is also connected to the concept of IT as a Service (ITaaS).  The reason customers haven’t been able to connect all of the components is that while you did have things like Software Defined Storage, and Software Defined Networking they generally came from different companies, didn’t talk to each other well, and alone by themselves didn’t define the entire datacenter.

It is kind of like building a building with 3 of the 5 subcontractors you need, and no general contractor overseeing things.  Whatever results would likely suck and it certainly wouldn’t be considered a complete building.

VCE can pull off SDDC with its VxRack systems for two reasons; 1) they build the Data Center as a unit so they control all aspects of it, and 2) VMware has a centralized component in EVO SDDC Manager that performs the role of connecting all the dots when they are assured during the manufacturing process.

Largely because of VCE’s unique comprehensive approach to this idea of a Datacenter as a product concept, the company can do what others only talk or theorize about.  And, in the end, it is doubtful a true Software Defined Data Center can really be created unless you take a holistic approach similar to VCE’s. The fact is that anything not designed to integrate from the start likely won’t integrate well after the fact.  This is because of the inherent complexity of large scale data centers.

Benefits of A Software Defined Datacenter

The core benefits of SDDC are far more effective utilization and flexibility.  You are simply able to use more of what you purchased consistently and your ability to change configurations based on the demands is the most automatable for any generation of hardware.  It may not have the most advanced individual components but it is the most advanced system and that means less waste and fewer potential failures due to in-system conflicts.

It also sets the stage to layer on more advanced intelligent management layers because the configurations are designed to be changed virtually not physically.   So as you add intelligence to the management systems, you simply face fewer issues with integrating the improved features because more of the system is controlled by software.

This is an interesting area to watch because, in theory, unless you build data center solutions like VCE does, you shouldn’t truly be able fully control them with software. Too many of the components simply won’t be well enough integrated to work properly, at least not at Enterprise Scale.  I’ve spoken to some of VCE’s large cloud service provider customers and it is clear then don’t think any other architecture can support SDDC effectively. That kind of makes me wonder about the claims from other vendors with so-called SDDC solutions.

In any case, when it comes to SDDC, VCE may literally stand alone.

DreamMe, sleeping with your smartphone