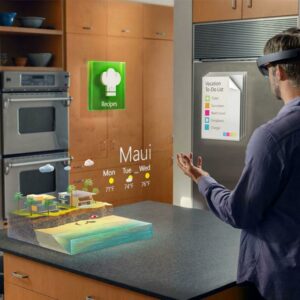 I’m at Microsoft Build this week and one of the big parts of this event is the showcase of the nearly final Windows 10.  I’ve been running this product for months now and have been impressed with how much more elegant it has become over time.  It has also become far easier to use than Windows 8 partially because features like fully scalable windows were brought back.  In fact, come to think of it, it brings back Aero Glass which was one of the best parts of Windows 7, which helps it look more elegant.

Spotlight is what you see on the lock screen and every time you start you’ll get a new beautiful picture.  The new part is that you can click up in the top left corner and when you see a picture you like or don’t you can tell Windows which will learn, over time, just what kinds of pictures you enjoy and customize itself to those needs.

Cortana on Your PC

This is the first showcase of Cortana on Windows.  I’ve been using Cortana for some time on my Windows phone and I often make fun of my wife’s iPhone because it is better, and generally my wife makes fun of my Windows phone (so this is a bit of a payback).  Cortana is more of a digital assistant so you can ask her to do thinks like open apps and execute stuff within them (assuming the app is part of the new Windows ecosystem).  So you can, for instance, tell Cortana to open a specific communications app, who to send the message to, and what the message is in one sentence much as you might have done with a secretary years ago (suggesting really old folks, like I’m becoming, who had secretaries will love this).

IE has really become a problem.  It simply isn’t the way things are done now and it breaks on a lot of new web sites.  On the other hand a lot of legacy web sites were written for it so they break on most anything else.  Microsoft Edge, which used to be called Project Spartan, is designed to address the former and IE 11 to address the later.   Edge is much faster, it is much more “edgy” (which is likely where the name came from), and it fully supports web extensions (strangely now when I go to a web site that identifies browsers, Edge is identified as Chrome which will, I’m sure, get fixed shortly I should point out that if they don’t run on Chrome they don’t run Edge either).

This is actually rather cool   If you are working on a tablet and connect it to a monitor or if you are using a Windows tablet like Surface as a laptop and change it to tablet mode the user interface changes to optimize it for the use.  The tablet interface becomes a PC interface with the monitor and the PC experience becomes a tablet experience when it becomes a Tablet.  This was the part that was really broken in Windows 8 which also had both modes but changed based on whether you were running legacy apps or not and drove folks nuts as a result.   What is particularly cool is Continuum works on Windows phone, so the Phone when connected to a monitor, keyboard, and mouse looks just like it is running on a PC.  Try that with your iPhone.

OK now there is something that is somewhat surreal about moving from talking about improving PCs, Tablets, and Phones to talking about making them obsolete.  What is really amazing is just a few months ago Microsoft had this as kind of a science experiment which consisted of ugly heavily wired hardware connected to a head mounted display that was uniquely heavy and uncomfortable to what feels like an almost cooked product which is far sleeker, fully self-contained, and damned near done.  This thing can turn any wall or surface or even the air into a display which can follow you around if you like (imagine a big screen TV that could be as big or small as you want and would follow you around the house).  If they’d just stopped there I’d have bought this.   Imagine digital pets that kept you company and followed you around (that didn’t poop on the carpet), the ability to look and see what was inside walls (by projecting visual representations of plans or photos of the actual construction of your house), or where a remote helper could guide you both by seeing what you see and being able to show you on what you are seeing what you need to do.

This is a game changer and the kind of thing Microsoft had to do to take the momentum back from Apple and Google.

What I think is truly amazing is this is just the start of the Windows 10 rollout and just a touch of the birth of Hololens.  If Satya Nadella was able to do this in the first few months he has been running Microsoft imagine what will result after he has been there for half a decade?  Windows 10 will change how you view Windows, HoloLens will change how you view the world.  This is the true potential of Microsoft and when that company executes to this level even the amazing becomes possible.