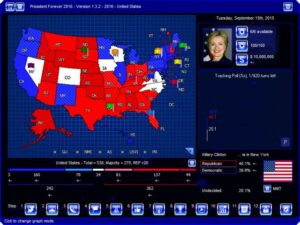 Barack Obama’s presidential campaign launched a relatively inexperienced and unknown black man into what had been traditionally a role only held by experienced white men.  In his first and second election campaigns, Obama should have been overmatched by more experienced politicians, both during the 2000 primaries against a seemingly unstoppable Hillary Clinton and the final elections against John McCain and Mitt Romney.

Instead of losing badly, Obama rolled over his opposition largely as a result of an election strategy that made heavy, excellent use of social media with a foundation of analytics.  It isn’t clear that Obama’s opponents had an analytics team during the first election and in the second, the President’s group of 50 focused experts simply rolled over Romney’s pathetic 4 person team.

It was almost as if Obama had the equivalent of a nuclear bomb at his disposal while his opponents were still trying to figure out bows and arrows.  In the upcoming 2016 race for the presidency, Obama’s lesson won’t be lost on many of the players. Those who can field a strong analytics team and effectively utilize ever more powerful social media tools will likely overrun those that don’t. Moreover, the firm that provides the core technology is likely to become the poster child for analytics, when they get the subsequent credit.

But who will step up?

There is an enormous risk here because whichever candidate loses, the attention will likely be as much about the candidate’s team dropping the ball as it will be the analytics vendor. But, I expect folks will focus most of their displeasure on the vendor.  The risk/reward dynamic is pretty clear because often the candidate’s election team, not the analytics company, typically gets the credit for the win. But when everyone is looking for someone to blame for the loss, the analytics team will be high on the short list of easy targets.

So the firms that step up have to be confident that not on their analytics tools work but that they can resource this effort to a level that assures success. That means they need to avoid the crazy and Luddite candidates like the plague.  And if current trends continue, there will likely be more candidates who can’t spell “technology” than there will be those that know how to use it.

Not only will winning the election likely turn the analytics firm into a household name but it also bestows in the company a potential windfall in government influence.  Other politicians will likely see the firm’s king maker potential and, for a fraction of the cost of a major lobbying effort, the winning firm could develop the kind of influence that only Google enjoys (assuming they learn from Google’s excesses and mistakes). That could become their most valuable asset during the term of the new President.

You’d expect a winning analytics firm to be favored by other candidates at both the State and Federal level, meaning they could successfully compete for government contracts after the election concludes.   Demonstrated success is often very hard to come by for tools like this and no one wants one that doesn’t work.   Another election win tied to a specific firm’s technology would likely force a broader adoption of that technology for more aspects of government with that winning firm as the gold standard competitors have to compare themselves against.   This would provide an unparalleled bidding advantage because a firm that defines a spec will always have an advantage.

A Change in Government

Government is often defined by how slow it moves to embrace new ideas and concepts.  A winning strategy in 2016 could help drive analytics through the government, potentially making its less error prone and more effective and responsive. Helping craft public opinion, proactively preventing crippling demonstrations, and building grass roots support for major political goals are all part of the promise of what well-used analytics could do to improve the US government.

Wrapping Up:  Analytics Will Decide the Next Election

There is no doubt that effective analytics will define the next election.  Interestingly, the two women candidates, Hillary Clinton and Carly Fiorina, are also the most likely to use it successfully.  Clinton was overwhelmed by Obama’s analytics team when she ran against him in 2000. She is not stupid and should have learned to use analytics tools, or more likely, recruited many of President Obama’s experts.

Fiorina used to run the world’s largest a technology company – HP – and is likely to be comfortable with this technology and more likely to understand just how and where to use it.  Fiorina could actually be more effective than Clinton, which she’ll need to be given her past business and political failures and her need to build an electable image.

In the end, the next election could be between two women both of which should be able to use a powerful weapon better than their male counterparts.  If Clinton or Fiorina triumphs, male candidates will only have themselves to blame for the resulting irony.

But a new analytics company could also emerge as real a power in government IT as a result of the 2016 election. They just have to be willing to take the risk and commit the resources to the effort.