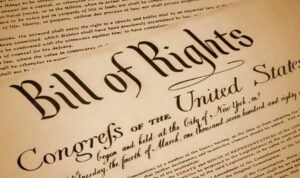 So is it time to dust off the old parchment papers and perhaps give the Constitution a more ‘modern’ look and feel to better suit our current times?

I fully understand that this kind of article doesn’t exactly fit on a tech site but there have been a number of cases where the use of technology to subvert constitutional rights has appeared on many technology sites.

And I also realize that this is a completely cynical look at the Bill of Rights based on my observations and personal interpretations of the numerous assaults on our Constitution over the years, primarily conducted by our own elected officials.

So if you just want to read about the new iPhone or Google Glass and don’t care about my rants on the Constitution then just skip this one (and don’t bother adding a comment telling me an article like this doesn’t belong here).

So let’s take a look at the first ten Amendments, commonly referred to as the Bill of Rights.

First Amendment: Congress shall make no law respecting an establishment of religion, or prohibiting the free exercise thereof; or abridging the freedom of speech, or of the press; or the right of the people peaceably to assemble, and to petition the Government for a redress of grievances.

Mixing politics and religion has always been a sticky business, but politicians are perfectly willing to promote religion (as long as we’re talking about the Christian religion). There are so many references to ‘God’ in our oaths, our pledges, our laws and even on our money that you can’t escape them. So I think that particular horse has left the barn long ago. Should the government officially adopt Christianity as the national religion? I think they already have. Should the government be allowed to prohibit the free exercise thereof? Again, if we are talking about Christianity it should be alright for people to worship Christianity however and whenever they wish. But when it comes to any other religions probably not (who knows what anti-Christian or anti-government things they might get up to).

Freedom of speech and freedom of the press, well, those are a bit trickier. Both have been subjugated numerous times for various reasons. Many times the reasons seem perfectly logical – slander, libel, obscenity, inflammatory statements, calls for civil disobedience, publishing information about how to make explosives, promoting terrorism, etc. have all been cited as reasons to restrict freedom of speech and freedom of the press. Other reasons have included protecting the identities of spies, revealing state or national secrets or because, as one general said during the first gulf war, ‘publishing death statistics might give the American people a bad impression of war.’ It’s all very murky and muddy and these two freedoms have been a thorn in virtually every government’s sides since governments were invented so let’s just drop those two items.

Finally the right of the people to assemble and ask the government for a redress of grievances. Not a good idea at all. If you let common people get together to talk about things they are bound to come up with ideas that would directly conflict with the government’s wishes. Best not to let people congregate for anything other than sporting events and the dropping of the ball at Times Square.

As for the right to petition the government for a redress of grievances? On the surface this seems innocent enough. After all, it’s not like the government has to actually listen to anything the people say. But if people began petitioning the government every time they have some silly grievance then it’s just going to clog our politician’s inboxes. Besides, if the people want to change something they already have the right to vote for the politician who says they will address those grievances, so we’ve already got that covered. Let’s not encourage people to express their concerns about anything except in the voting booth.

So basically let’s rewrite the first amendment to read something like this:

Second Amendment: A well regulated Militia, being necessary to the security of a free State, the right of the people to keep and bear Arms, shall not be infringed.

This is a tough one. On the one hand there’s nothing as scary to a government than the possibility the people will one day rise up and boot their lazy asses out with the force of arms. But on the other hand we have the NRA. Sure we have rampant gun violence in this country but in a weird way we are almost proud of it. It’s how we drove the British out in the first place. It’s how we got rid of the Indians. Guns are an integral part of our Wild West heritage.

I’m not sure what the founding fathers thought a ‘well regulated Militia’ might mean – I suppose they didn’t want Militias that were more like vigilantes running around like madmen shooting up the streets. So perhaps there is a compromise we could make that would ease the fears of governments yet still let everyone buy machine guns from vending machines. How about rewriting the second amendment to read:

A government-controlled, carefully monitored and regulated Militia, being necessary to the security of the government, and the right of the people to keep and bear Arms, shall not be infringed.

Third Amendment: No soldier shall, in time of peace, be quartered in any house without the consent of the owner, nor in time of war, but in a manner to be prescribed by law.

I don’t have any problems with this one but since this hasn’t been much of a problem in the past 200 years or so, then I’m not sure it even needs to be in there anymore so let’s just take it out.

Fourth Amendment: The right of the People to be secure in their persons, houses, papers and effects, against unreasonable searches and seizures, shall not be violated, and no warrants shall issue, but upon probable cause supported by oath or affirmation, and particularly describing the place to be searched, and the persons or things to be seized.

I think the Patriot Act pretty much repealed this one back in 2001 so let’s just drop it from the Bill of Rights altogether.

Fifth Amendment: No person shall be held to answer for a capital, or otherwise infamous crime, unless on a presentment or indictment of a Grand Jury, except in cases arising in the land or naval forces, or in the Militia, when in actual service in time of War or public danger; nor shall any person be subject for the same offence to be twice put in jeopardy of life or limb; nor shall be compelled in any criminal case to be a witness against himself, nor be deprived of life, liberty, or property, without due process of law; nor shall private property be taken for public use, without just compensation.

This amendment has been stepped upon and overturned and basically eviscerated with loopholes and legal trickery so much that it basically has no meaning anymore. You can see why the founding fathers felt it was necessary to try and protect people from being arrested and thrown in prison or having their property seized on a whim but again the Patriot Act did away with most of that and Imminent Domain laws did away with the rest. Having separate federal and civil courts got around the double jeopardy bit and not being compelled to be a witness against yourself – sometimes called the right to remain silent – is pretty much a joke. Again, let’s just drop the whole thing.

Sixth Amendment: In all criminal prosecutions, the accused shall enjoy the right to a speedy and public trial, by an impartial jury of the State and district wherein the crime shall have been committed, which district shall have been previously ascertained by law, and to be informed of the nature and cause of the accusation; to be confronted with the witnesses against him; to have compulsory process for obtaining witnesses in his favor, and to have the Assistance of Counsel for his defence.

Again, the Patriot Act and the National Defense Authorization Act wiped out most of this so I don’t think we need it anymore.

Seventh Amendment: In suits at common law, where the value in controversy shall exceed twenty dollars, the right of trial by Jury shall be preserved, and no fact, tried by a Jury, shall be otherwise re-examined in any court of the United States, than according to the rules of the common law.

This one is self-contradicting since the last little caveat ‘according to the rules of the common law’ nullifies everything else.

Eighth Amendment: Excessive bail shall not be required, nor excessive fines imposed, nor cruel and unusual punishments inflicted.

Since everyone has a different interpretation of what is or isn’t excessive bail, an excessive fine, or what could be construed as cruel or unusual punishment (for example the death penalty) I’d say this amendment is simply too vague. Either rewrite it with specific ranges for bail or fines depending on the offence and the risk of flight and specific definitions of what constitutes ‘cruel and unusual punishment’ (although Bush used his ‘line veto’ to erase any restrictions on using torture) or simply get rid of this one too.

Ninth Amendment: The enumeration in the Constitution, of certain rights, shall not be construed to deny or disparage others retained by the people.

Again, this is so vague that it is practically meaningless. What rights retained by the people supersede the Constitution? None that I can think of.

Tenth Amendment: The powers not delegated to the United States by the Constitution, nor prohibited by it to the States, are reserved to the States respectively, or to the people.

This just seems like a catch-all, non-statement. It’s sort of like saying ‘If we forgot anything then just stick to whatever was in place before this.’

So what are we left with?

Second Amendment: A government-controlled, carefully monitored and regulated Militia, being necessary to the security of the government, and the right of the people to keep and bear Arms, shall not be infringed.

Now that wasn’t so hard was it.