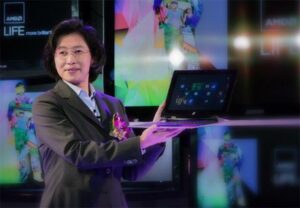 AMD just announced an unexpected change at the top and folks are scrambling to understand it.  Part of covering turnarounds is understanding the process and realizing that certain things have to happen at certain times for the turnaround to be successful.  Lisa Su was being groomed to be the next CEO at AMD and her move into that spot would have signaled that the initial mechanics of the turnaround were over and that AMD was shifting back to a more traditional management structure indicating they had turned a page.

I had a nice chat with Lisa Su about this let me explain what is going on.

Phases of a Turnaround

There are basically 5 phases of a turn around.  The first phase is denial, the second phase is panic, the third is structurally changing the company, the fourth is shifting back to more appropriate leadership, and the 5th is wither going back to phase one or moving back to normal operation.

Not many folks consider phase one but it warns that a turnaround is coming.  Financials may not have started to decline but in the first phase new competitors may have emerged, an unexpected market change may have happened, and people covering the company are increasingly doubting management has a clue.  Executive management is focused on telling people things are fine and the board is typically sending out notice that they have full confidence in their CEO (which generally means they increasingly don’t).

Second phase typically starts with the realization that leadership needs to be fixed and often the existing leadership is terminated and the board is forced to rapidly look for a new CEO.  The CEO firings typically don’t go well and this creates the dual problem of needing to find replacement rapidly and most of the qualified candidates running the other way because of how their predecessor was treated.  But the right thing to do is focus on someone that can do the initial plumbing changes, you don’t need an expert in the industry, you need someone who can reorganize the company, stop the financial bleeding, and create an environment where a qualified CEO will accept the job.

In the Third phase the company goes through the planned restructuring.  Done right this is typically very deep cuts with most of the focus on stopping the bleeding buying management time to correct the functional problems in the company.  Both Louis Gerstner and Steve Jobs showcased best practices here, they cut deep early and got their respective companies back in the black so they could then accelerate.

In the 4th phase you need a subject matter expert again because, often, the turnaround manager has either burned too many bridges or isn’t expert enough to drive the company forward.  Think of this as the difference between a mechanic and a race car driver.  You need the mechanic to fix the car but you need a race car driver to fine tune it and win races.   Steve Jobs, because of who he was, was able to transition from turnaround expert to industry expert successfully, at IBM this was when Louis Gerstner was replaced by Sam Palmisano.  Often this is the phase where you get failure forcing a return to phase one, something that HP did several times last decade.

In the final phase the firm moves to sustaining operations, assuming the company makes it this far.  Be aware that most turnaround efforts fail before fully returning to regular operations because of screw ups at the highest levels of the company or a failure to execute in a major functional area.

AMD is at Phase 4

Now why this caught a lot of us by surprise is that we thought AMD would be in Phase 3 for at least another year or two.   The recent organizational changes increasingly Lisa Su’s responsibilities would have indicated they were moving toward Phase 4 but had at least 12 months before getting there.  However while this is more normal practice there is no absolute rule requiring this time.  If the benefits the board were looking for were achieved prematurely then making the next step early would be in the best interest of the company and its investors.

Now there could be other triggers that could cause this to happen early.  Miss-behavior or an inability to do the job by the CEO (this last typically tied to illnesses with the CEO or their spouse) are alternative triggers but I’ve been assured neither is the case.  This supports the argument that the AMD board, being more than happy about the progress, is asking AMD to accelerate by driving it into phase 4.

AMD is still in the midst of a turn around.  The recent executive change would indicate they are accelerating into Phase 4 by replacing the turnaround expert with a subject matter expert in an effort to move to the sustaining phase more quickly.   While this doesn’t mean AMD is out of the woods, it does suggest AMD’s board can now see the road out and wants the company to drive more quickly to get there.  Far from negative, this would tend to support the conclusion that AMD (at least with respect to how the board sees company) farther along in the turnaround process than we previously thought.

[DEBATE] Will Windows 10 be a success or a failure?