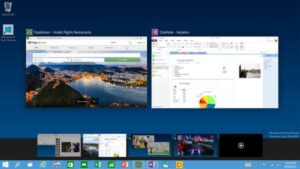 I went to the Windows 10 IT introduction event this week and it brought back memories of all the Windows Versions I’ve attended similar events for. There is a certain evolutionary cadence to Windows that you pick up after watching the product over a period of time.  I’ve been one of the launch analysts for Microsoft products since Windows 95 and  it was a critical part of my path to becoming a successful analyst so I’ve paid close attention.   Once you understand what to look for, you know which versions of the product are going to be successes, and which ones aren’t.   Let’s look back over the last two decades and talk about why and when Microsoft got it right and wrong.

This was a high point in Microsoft’s history.  The lines of eager consumers were longer, if you can believe it, than they are for Apple products today and this wasn’t a phone, tablet or MP3 player, it was an operating system.  Even Apple has never generated this kind of excitement for an operating system.   What created this first massive success was a serious effort by Microsoft to get users and developers excited about the product. Even the launch was picture perfect with clouds in the sky that looked like those on the box and the festivities at Microsoft’s campus looked more like a State Fair than any launch I’ve seen before or since.  Windows 95 was a pivotal offering for both good and bad.   Bad because there were three mistakes made that set the stage for future failures;  First and foremost was a set of changes placed into the product at the last minute which introduced bugs after the beta period.   Next, this drove massive numbers of service calls and Microsoft’s support manager, in order to keep call lines down so her metrics wouldn’t look bad, artificially shortened wait times by not allowing callers to connect which really pissed folks off.   Finally, virtually the entire executive team went on vacation right after the launch so when the crap hit the fan there was no one available to deal with it.   Strangely, the lesson Microsoft seemed to walk away with from these failures was don’t create massive demand not don’t do stupid stuff that screws up a launch.

This product release was much lower key; Microsoft still had some lines but they were pretty short.  It was clear that the company didn’t want the attention that Windows 95 had received and didn’t build this product up as much.  Instead, they were focusing folks more on Windows NT, which basically was a clean room recreation of OS/2, so the 98 version was becoming an afterthought.   Still, the product came to market clean, there were far fewer bugs and problems and while the Windows 98 was forgettable in many ways, that was actually a good thing.

These versions of Windows were rushed to market with a focus on getting them out the door ASAP. Unfortunately, Windows ME, the follow on to Windows 98, was under resourced, as well, turning it into a nightmare that was arguably one of the worst products Microsoft ever brought to market. That was largely because if you were smart, you were likely working on Windows 2000 instead, even as Microsoft continued their unfortunate pivot away from end users. This trend started when they went to war with IBM, and began focusing instead on professional IT.   As a result, these offerings showcased the cadence of a troubled product followed by more user focused offering that continues to today.

Arguably the most beloved version of Windows today, XP didn’t start that way.  Many folks were coming from the Windows 9x code base and Windows XP was very different in almost every way.  It was designed to replace and fix Windows 2000 and be the successor to Windows ME.  It was far more about pleasing corporate buyers than it was about consumer fun. That was because as the fun people in Microsoft moved to the Xbox division, Windows increasingly was more about work.   Still, folks adopted this product and then wouldn’t leave because they liked it so much. The refusal of those same people refusing to leave XP represent one of Microsoft’s biggest risks today.

This was simply a train wreck.  Folks once again got more focused on the date Vista was due to come out than on getting the product right.  Major components were deleted late in the cycle without realizing  dependencies were being impacted. Anyone pointing out the thing was called a turd,  silenced or ignored.  The company line was that Windows Vista was going to be great and no foolish facts were going to be allowed to get into the way.   After launch, it quickly became a disaster resulting in painful litigation and lots of public ribbing by Steve Jobs who was still a bit sore that Bill Gates had taken away the PC market from him.

Over time, Vista was massively patched and by the end it wasn’t that bad a product but it never recovered from under the first impression of massive, embarrassing failure.

To its credit, Microsoft listened and aggressively addressed the problems with Windows Vista in creating Windows 7.  This product came to market much like Windows 98 and XP did as mostly a fix for its predecessor.  After a solid beta cycle, it was well received though for many of those still using XP, the necessary hardware upgrade that was part of the migration path was just too painful.  For users made the transition, Windows 7 was night and day from Windows Vista in running well, fast and largely without any unneeded drama.

With Windows 8 we were back to the old Microsoft policy of not talking to others, not even those in the company, and, as a result, the version was crippled by horrid compromises.   Office didn’t run on the new interface which forced an ugly switch between tablet and PC modes which had nothing to do with the mode the customer was using.  App developers seemed to avoid the platform like the plague, largely because they were already spread too thin between more successful iOS and Android platforms.  People so aggressively avoided Windows 8 that OEMs were sneaking out Windows 7 offerings so they wouldn’t go out of business and droves o enterprise customers avoided or refused to purchase it.   Once again, Microsoft focused on the delivery date instead of product quality and result was a disaster.

The newest version, Windows 10 fits in this cadence nicely.  Microsoft is listening again and this product addresses virtually all of the pain points I’m aware of in Windows 8.  It switches modes from touch to non-touch based on the hardware and not the legacy application,  embraces management and security for IT and supports Ultra HD displays for consumers.  It falls into the same cadence that identified Windows 98, XP, and 7 as the products to actually buy, deploy, and use.   I think most consumer and business end users will be pleasantly surprised at how much better Windows 10 is than Windows 8.

Wrapping Up:  It’s The Cadence

If you like Apple iPhones and have been watching, you buy the “S” products. Why? Because they don’t have battery or antenna problems, nor will they likely bend because they’re badly designed. That’s because “S” products represent Apple’s successful fixes of the inevitable mistakes that crop up in new offerings which are always rushed to market.  Microsoft has a similarly fix-focus cadence, as well, that started with Windows 98 and should be showcased by Windows 10.  If you learn and remember a vendor’s cadence for good products you’ll both know what to skip and will be better prepared for the alternating bad years and releases. I expect Windows 10 will be a keeper.  I plan to load and start living off the Beta myself this week because I too want the good qualities and features that Windows 10 has to offer.

Police and government confused and frightened by encryption

Health and fitness devices and apps raise some serious questions