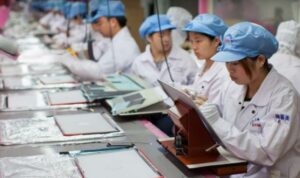 Benzene and n-hexane are as nasty as they sound and are believed to cause cancer and even nerve damage.

The noxious chemicals are used in the manufacturing of iPhones, iPads and Mac, as well as iPods. But, that is going to stop now because Apple has announced that it is banning them from final assembly in all of its devices.

The decision while meant to protect factory workers actually comes five months after a petition was handed to the company by China Labor Watch and Green America asking Apple to abandon, you guessed it, benzene and n-hexane from the production of iPhones, according to The Associated Press.

Apple said that after a four month investigation of 22 factories it found no evidence of the substances endangering workers at its manufacturing plants, where up to 500,000 people are employed.

While Apple is saying that it is banning the chemicals from final assembly, it still plans to allow their use during the early phases of production which takes place at apparently hundreds of factories that don’t take part in the final assembly. However, Apple is reducing the maximum amount of benzene and n-hexane that can be use at this installations.

It’s also important to note that all the factories in question are  contractors for Apple and not actually Apple factories, per se, but that seems a moot point when you consider that these factories probably rely solely on Apple for much of their business effectively being at the mercy of the company.

On the bright side, Apple’s adoption of these safer practices should shame other gadget makers into cleaning up their act. Of course, there are plenty of other toxins being used in those factories but they don’t seem to be on anyone’s conscience come new iPhone launch time.

The factories that are having to adopt new guidelines are not restricted to China, either, with facilities in Brazil, Ireland, Texas, and California subject to the same conditions being set down by Apple.