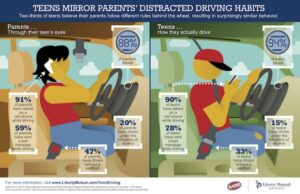 A report by Liberty Mutual Holding, an insurance company, says that, ironically, US parents are ignoring their teenage children when it comes to some serious stuff like not dying while driving.

According to the report, 42% of teenagers say that when they are passengers in their parents’ cars they are ignored when they asked their parents to stop texting and driving. A further 18% can’t get their parents not to drive when high and 40% said that, in general, their parents ignore them no matter what they tell them about their behavior.

According to the National Highway Traffic Safety Administration n 2012, in the US alone, 3,328 people were killed in “distraction-affected” car crashes which includes texting, grooming and eating. 5% of teenagers told the survey that they were in a car with a parent under the influence of marijuana.

Teenagers are usually the target of advertising and PSAs about texting while driving and also, to some extent, driving under the influence, but it is the parents we should be concerned about.

84% of parents in the survey said that they stopped doing stuff that their teenagers complained about but that doesn’t jibe with what the teenagers themselves told the survey.