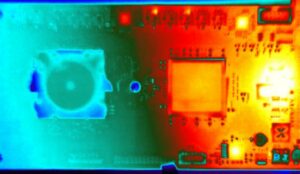 It’s smarter than the average chip according to IBM, and can simulate the brain’s neurons, doing brain-like stuff without consuming a lot of power.

IBM researchers have developed a computer chip made up of 5.4 billion transistors capable of simulating the activity of over a million neurons and 256 million neural connections.

It is, in effect, a processor that processes information like the biological components of the human brain. So, connecting chips and patterning the network like the human brain should result in human like processing characteristics.

The researchers do not, however, claim to have built an artificial brain. They have used their knowledge of the human brain and created a brainlike chip. The analogy they draw is the computer chip is a “left-brained” circuit that is good at crunching numbers really fast. The chip is a “right-brained” circuit which means that it isn’t just about crunching numbers quickly.

As a result the IBM chip is pretty good at conserving energy and not just about brute force power. However, IBM’s researchers say that their chip is more efficient than standard computer chips.

The real genius of the chip is in the density of the circuitry and its power efficiency while still retaining an architecture that is quite complex and unlike standard circuitry. The expectation is that IBM’s chip will provide more “awareness” for today’s mobile computers. It may be used to move processing like image recognition directly into the camera chip rather than leveraging core processors to crunch highly complex image processing algorithms.

The density of the chip also means that more processing power can be fitted into the typical mobile phone than is available today. So, something like Siri that uses the cloud for processing power may be able to localize a lot of its functionality on a device.

The chip was created as part of the DARPA SyNAPSE program that wants researchers to build a computer that is akin to the layout and functionality of a mammal brain with the intelligence of a cat or mouse.

The human brain is, maybe thankfully, out of reach of the chip, having 86 trillion neurons and 100 trillion synapses. So, we can rest easy there for a while. Skynet is not self-aware, at least for now.

Biggest recall of flat screens in the US