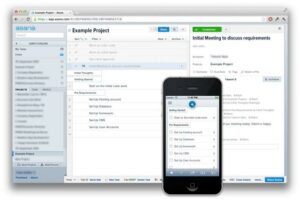 Dustin Markowitz is the co-creator of Facebook so, he knows a thing or two about having a giant email inbox and how to run a social network.

With former Googler and Facebooker Justin Rosenstein, he has formed a San Francisco startup called Asana that sells software which combines elements of a social network, IM, Google Drive and aims to get rid of the mess of email as a focal point for collaboration within an organization.

Rosenstein called email “soul-sucking work” and with his partner he wants to take that misery out of the corporate world. And yes, they compare it to the way consumers are moving away from email and leveraging Facebook, Twitter and mobile messaging instead.

Markowitz built an early prototype of Asana in late 2007 while he was still at Facebook. Driven by his frustrations with email and a desire to build a better way to manage Facebook’s projects.

In 2008, Markowitz left Facebook to start Asana even though he left behind his prototype which is still being used inside Facebook to manage its projects instead of email.

Similar to Jive Software and Microsoft’s Yammer, Asana may not necessarily get rid of email but it is trying to change the way people communicate in groups particularly when they are driven by collaboration and tasks.

Email is still cheap and its use is growing in corporations and businesses as its use declines among consumers. So, Asana is facing an uphill battle but claims to have millions of users of its free version presently. In addition, it has had the pedigree to attract other major startups like Airbnb and Uber to its platform.

Of course, you can try and go without email yourselves, maybe for a day, and see how things shake out for you.

As for Asana, it is free for teams of up to 15 workers. Users create tasks or projects that are shared with a community through a project home page. Much like a social network, you are posting tasks, sharing with workers, and everyone can them comment and follow threads throughout.

Tasks and projects can be prioritized and managers can track deadlines and statuses. You can also have external team members, like contractors, controls as well as limit internal access. There is also private messaging and little heart stickers to signify agreement, much like a Like on Facebook.

It may be that the service will appeal to a generation growing up communicating through social media. But whether it kills email, that’s not something that anyone would want to go on a limb to predict, except the founders of Asana.