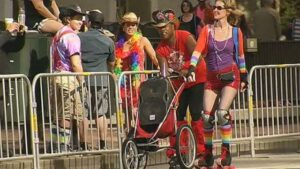 Apple released a video showing the smiling employees as they marched through the streets wearing branded t-shirts and waving multi-coloured flags.

The Cupertino-based tech company said that employees from around the world participated in the parade “to celebrate Apple’s unwavering commitment to equality and diversity.”

Equality has been a hot topic for Apple in the past. Last year, Cook called on Congress to pass the Employment Non-discrimination Act in an editorial for the Wall Street Journal and the company also publicly opposed an Arizona bill permitting businesses to refuse service on religious grounds, which was ultimately rejected by Governor Jan Brewer.

The IT and tech industries are currently engaged in a long term battle with equality and diversity, as recent research has shown large gender and ethnicity imbalances.

Tech giants Facebook and Google have both recently released workforce diversity figures showing a general male and Caucasian dominance, however both have publicly committed to bucking this trend through various programmes and strategies.

In a statement released alongside the video, Apple declared: “We believe that inclusion inspires innovation.” They certainly seem to be doing all they can to prove themselves right.

Experts optimistic yet cautious about dangers to future of the Web