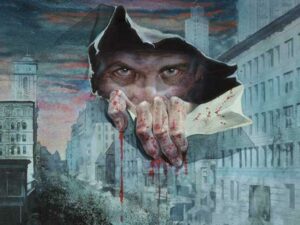 According to a new Pew Research report, the majority of experts are hopeful about the future of the Web but 35% saw potential problems looming.

The Pew Research 2014 Future of the Internet canvassing describes the canvassing like this:

The expert predictions reported here about the impact of the Internet over the next ten years came in response to one of eight questions asked by the Pew Research Center Internet Project and Elon University’s Imagining the Internet Center in an online canvassing conducted between November 25, 2013, and January 13, 2014. For this project, we invited more than 12,000 experts and members of the interested public to share their opinions on the likely future of the Internet and 2,551 responded to at least one of the questions we asked. More than 1,400 responded to this question about access and sharing online in 2025.

Since the researcher’s hand-selected the people who were sent the survey they aren’t calling it a random survey but in many ways the results are even more significant since it included research scientists, entrepreneurs, business leaders, authors, editors, journalists, technology developers, administrators, advocates, activist users, futurists, consultants, legislators, politicians, lawyers and ‘pioneers’ or ‘originators.’

Pew Research says, “Since the data are based on a non-random sample, the results are not projectable to any population other than the individuals expressing their points of view in this sample.”

Top of the list for potential problems of freedom going forward are “actions by nation-states to maintain security and political control that will lead to more blocking, filtering, segmentation, and balkanization of the Internet.”

Leah Lievrouw, a professor of information studies at the University of California-Los Angeles, wrote, “There are too many institutional players interested in restricting, controlling, and directing ‘ordinary’ people’s ability to make, access, and share knowledge and creative works online—intellectual property rights holders, law enforcement and security agencies, religious and cultural censors, political movements and parties, etc. For a long time I’ve felt that the utopianism, libertarianism, and sheer technological skill of both professional and amateur programmers and engineers would remain the strongest counterbalance to these restrictive institutional pressures, but I’m increasingly unsure as the technologists themselves and their skills are being increasingly restricted, marginalized, and even criminalized.”

Jeff Jarvis, director of the Tow-Knight Center for Entrepreneurial Journalism at the City University of New York Graduate School of Journalism, shared his in-depth point of view, writing, “Government poses the greatest threat to the Net’s freedoms. Many governments, including Western regimes, threaten to control some part of Internet communication. Obviously, China, Iran, and other authoritarian states wish to control speech there. But Canada and Australia have threatened to filter all Internet content to get to child porn. Once one government is given the means and authority to filter communication, information, and content for one reason, then any government can do so for any reason.”

Next on the list was the evaporation of trust in the wake of revelations about government and corporate surveillance and likely greater surveillance in the future.

Christopher Wilkinson, a retired European Union official, board member for EURid.eu, and Internet Society leader predicted, “Surveillance … at the minimum chills communications and at the maximum facilitates industrial espionage, it does not have very much to do with security.”

Next, a significant number of respondents predicted that the erosion of net neutrality and increased monetization of Internet activities will hurt the ways in which people receive information in the future.

Glenn Edens, director of research in networking, security, and distributed systems at PARC, said, “Network operators’ desire to monetize their assets to the detriment of progress represents the biggest potential problem.”

PJ Rey, a PhD candidate in sociology at the University of Maryland, wrote, “It is very possible we will see the principle of Net neutrality undermined. In a political paradigm where money equals political speech so much hinges on how much ISPs and content providers are willing and able to spend on defending their competing interests. Unfortunately, the interests of everyday users count for very little.”

The survey raises many other concerns for the Web going forward including copyright laws, ‘walled gardens’ and even personalized filtering.

It’s definitely worth a read, even if it is a bit scary in places. You can find the results of the survey here.