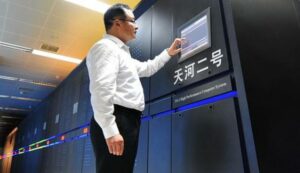 For the third time in a row, China officially has the world’s most powerful supercomputer.

The Tianhe-2, which is owned by the Chinese government and operated by the National University of Defence Technology, bagged first place in the global top 500 list after holding off competition from its main rival, the US.

China also showed a 20 per cent increase in the number of supercomputers it has in the top 500 tally, whilst the US representation dropped by 15 per cent.

Despite this decrease, the US still dominated the list by occupying nearly half (233) of the slots available. China came in second with 76, followed by a host of European countries including the UK (30), France (27) and Germany (23).

Such is the immense power of modern supercomputers, their ability is measured in petaflop/s, which is equivalent to quadrillions of calculations per second.

IBM’s Roadrunner was the first computer to break the 1 petaflop/s mark five years ago, a figure which pales into insignificance when compared to the whopping 33.86 petaflop/s generated by the Tianhe-2.

All the computers are measured against the same criteria, which was first devised in 1979, but has developed as computing has become more sophisticated

The list has been published twice yearly since 1993 and is a widely recognised indicator of the state of worldwide supercomputing.

The French turn their noses up at new .wine domains