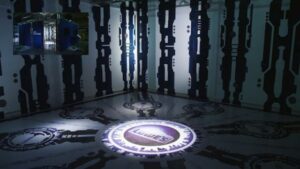 Virtual reality is hot again with Facebook buying Ocular Rift and, well, that’s about it. But it is hot, even though it has been around for a while and it does give you a headache.

But, the inner nerd knows that Picard and his crew were onto something with the holodeck. So, we should laud Lowe’s, the home improvement retailer, for taking virtual reality truly mainstream with its “holoroom.” Are you listening Mark Zuckerberg?

In the 20-foot by 20-foot specially designed room, customers can move anything from furniture to toilets and swap out floors and paint colors with the swipe of a finger on an iPad. The idea began as one of several comic book stories written by the team at SciFutures, a company that hires science fiction writers to create ideas for companies. The future they chose was one in which a couple walked through their home, visualizing their home improvements in virtual reality. The story had characters, tension and conflict. The hero was — you guessed it — Lowe’s (LOW). But don’t expect to see a holoroom in your neighborhood store this weekend. The rollout is planned to be tightly controlled, and holorooms will only be installed in two Canadian stores in Canada at first — and not until later this year. Lowe’s is making a bet this will pay off in more ways than one. In addition to a free, shiny new service that will lure customers to its stores, the holoroom is also a powerful data mining tool. With it, the company will be able to understand which products customers often place together, how people design their homes, and which region prefers which design.

Sony is Back at E3 Taking Names and Kicking Butt!