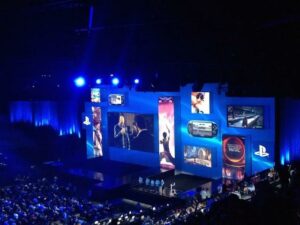 For the more than a decade Sony has been a train wreck of a company moving from the heir to RCA and the power in consumer electronics to the firm that couldn’t seem to do anything right.   One of the painful ironies was that Steve Jobs used Sony as a template for rebuilding Apple showcasing both that Sony’s model could be incredibly successful and that Sony has misplaced it.   Well that may have massively changed because at E3 we saw the old Sony, scrappy, focused, and aggressively moving to the next battlefield.   Of course another irony was that Sony was able to move against Microsoft in much the same way the Microsoft moved against Sony by exploiting an overpriced game console.

Let’s talk about the future of gaming and Sony’s return in the context of E3.

We are in the midst of what looks like a decade long revolution in gaming.  People are moving from their PCs and Game Consoles to tablets, smartphones, and streaming services.   This last will be the most disruptive because we saw a similar trend with movies which pretty much wiped out the DVD rental stores faster than the services actually displaced DVDs.

Now you’d think given Microsoft is one of the leaders in cloud services that they’d be on the forefront of this change but apparently Microsoft’s cloud and gaming folks don’t talk much and Steve Perlman, who was an early advocate of cloud gaming, had to leave the company to form OnLive an early game streaming service.

Now Sony has no streaming services to speak of, in fact they haven’t been that strong in cloud services at all but at E3 a major component of their announcement was the creation of both PlayStation TV which could stream games, and a game streaming service.    So coming from a position that was off the horizon behind Microsoft they are promising to be first in market with an offering that will eventually obsolete their own game console.

This would seem crazy except for the fact that console gaming companies use the cable model where they lose money on the console and then make it back up on game royalties.   The problem with that is it makes the games excessively expensive and it puts a massive amount of cost up front whenever a new console is created.   The streaming model is a pay as you go model that can embrace ad revenue and in game sales for revenue and profit resulting in decent games that are either very inexpensive or free.  And where the player can either buy a product like NVIDIA Shield to play the games from a third party or use an inexpensive client like Sony TV reducing substantially or removing the up-front costs.

The user gets a cheaper on-ramp to the games, cheaper games, and likely more variety because the game makers get a much larger potential audience to sell to.

Wrapping Up:  Game Consoles Are Dead!

That’s an easy conclusion but the question you should be asking is when.  Everything is dead, including us, at some future point.   The streaming trend is still early and we are likely 3 to 5 years from the time when consoles will no longer make sense and if you buy one it’ll still be a great client for a streaming service at that future point.  Given the really great games will remain console games for several more years if you want a truly great game that’ll be the way to go.   I should mention the game I most want to play isn’t a console game at all it is the wickedly cool Dreadnought (the game teaser looks amazing) and appears to be on on-line game (free for life) that dovetails with the new model.

However as streaming titles come out, if you play socially, it would be wise to get engaged with the ones you love because experience and in game enhancements that you’ll acquire over time will give you an advantage playing against those that enter years from now and when you game winning kind of is everything.

Finally even though Sony clearly embarrassed Microsoft at E3 with streaming their new CEO who knows the cloud better than most likely got the memo this time and I expect they’ll be back with a vengeance likely within the year and then things will really get interesting!

Loophole in PayPal is a "license to print money" for hackers