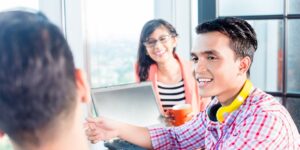 As a startup or small business, there’s very likely going to become a point where you need to create a mobile app. The mobile app might in and of itself be your business, or you may want to create one that customers can use in addition to the goods or services you offer.

When you start investigating, you’re likely going to find that it costs hundreds of thousands of dollars in some cases to have someone build an app in the U.S. in Canada, depending on features and functionality. Most startups and entrepreneurs simply aren’t going to be able to pay that.

For most startups and entrepreneurs, one of the biggest advantages of hiring overseas is that it’s going to be significantly less expensive. However, you do have to think about how you’ll make payments to the contractor or the app development company if this is the route you go.

For example, will the contractor want payment in their own currency? If you’re based in Canada, and you’re sending money to the Philippines, the currency exchange rate is ₱39.94 according to money transfer service Remitly. How will this affect your budget? What about the fees that you’ll pay to send money? Will the contractor want money sent to a specific bank? How often will they want to be paid, and how much is that going to end up costing in fees?

Additionally, while you might be paying someone overseas a lot less, how much time are you going to be dedicating to managing them? How long is development really going to take if there are hurdles in the process?

These are all things that can add to your budget, even when you’re going the cost-effective route and hiring overseas. It’s important to analyze those unexpected costs before jumping into anything.

If you’ve been shopping for app development in the U.S. and Canada and you’ve felt discouraged by the bids, it’s easy to feel like an offshore company is the answer to all of your problems. There are risks, however.

For example, aesthetically the standards for an app might not be the same in the Philippines as they are in the U.S. or Canada. There can be cultural differences that might affect the look, feel and quality of the app as well.

It may be difficult even to convey these issues to an overseas development team.

There can also be problems with communication. There are language and cultural barriers that can lead to misunderstandings, and those can have a huge impact on the final product.

These only touch on a few of the possible risks. There are also issues that can come with working with inexperienced developers that may oversell themselves, and there can be security risks as well.

It’s not necessarily a bad thing to hire overseas, but it is valuable for startups to be prepared and proactive regarding problems that could arise. It may be a good idea to hire a project manager if it’s in the budget. A project manager can be the person who has to make sure everything is moving along as it should. It’s also a good idea to have a plan for communication and what you want well before you start looking to outsource the work.

For example, you may need to be able to show the person or the team you hire exactly what your vision of a great app is. They may be coding experts, but do they understand design and UX/UI trends for apps in the U.S. and Canada? Are they aware of technology trends in general?

Finally, you should also have an overall communication plan. For example, if you’re in different time zones, how and when will you communicate? What is the timetable for the development process? What is your budget? These are all things to have specifically nailed down before looking for an overseas developer.

The impact of technology changes on the business world.

Mobile gaming, from yesterday to tomorrow