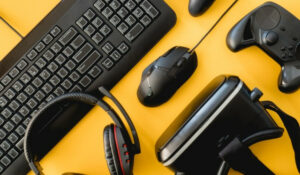 It all started on April 3rd 1973 when Motorola’s Marty Cooper made the first mobile phone call to troll his rival at Bell labs. After a slow start mobile devices have ever since conquered our lives, becoming something like an extra limb that is hard to function without.

As the mobile revolution started in the 70’s, technology and functionality were the main focus, not a lot of tech companies were thinking of using the groundbreaking technology for something as trivial as games. Mattel was one of the first to give mobile gaming a try in 1976 with Auto Race that was quickly followed up with a more sophisticated Football game. This made it clear that mobile gaming is an industry that should be taken seriously.Components were getting smaller, cheaper and faster and consumers were embracing the new trend all over the world. After that technology dictated the pace, LCDs gave birth to handheld games like the famous Donkey Kong and the birth of the Game Boy. The game changer was the birth of smartphones.

To get a better idea of what the first jump and shoot games were like take a look at http://www.pica-pic.com/ they have emulated a whole lot of “ancient” mobile games on their website.

Since Nokia added the game “Snake” to their phones in the late 90’s, games have been an integral part of phones. Some manufacturers did try to take over the mobile gaming market with powerful handheld consoles, like Sony’s PSP, but smartphones’ specs and popularity overtook the mini-consoles making them somewhat obsolete. Nowadays gaming abilities count as important features for flagship phones. Asus has officially announced its ROG as a gaming phone, with all the necessary features and accessories.

The gaming boom has also benefited the gambling industry. They wisely coupled modern gaming technology with secure payment systems to let anyone take a swing at a slot machine or poker table, a player in Ukraine get try his luck on a Malayan online casino for example.

Virtual Reality had caused a big hype in recent years but didn’t really get off the ground; the bulky hardware is bulky and not very practical for the mobile young generation. I can not see it going mainstream anytime in the near future.

Augmented reality had its moment of fame with Pokemon Go and is still doing well with the technical improvements on mobile devices. If anyone manages to successfully integrate it into games like PUBG or Fortnite then we can expect a new AR craze.

The biggest trend at the moment is in-game purchases, the times when you had to pay up to $100 for a game are over. Nearly all games are free to play but if you want to get serious then you have to upgrade your resources and that costs money. The side effect is a whole new industry built around game skins and resources.

Although a lot of analysts have declared the death of the desktop PC over and over again, I doubt that they will die anytime in the future, at least as far as gaming is concerned. Mobile devices are getting more powerful by the day but there is a limit on how much gameplay you can get out of a six inch display.

The success of the Fortnite mobile version shows that there is an acceptance for mobile multiplayer games but at the moment most players use the mobile version to fill in the gaps when they are on the road. Big screen high definition graphics are still the main attraction point for gamers.

It is safe to say that until someone finds a way to beat the big screen experience, mobile gaming will stay the domain of the Candy Crush and Angry Birds of this world.

What Should You Know About Hiring an Overseas App Developer?

What Things to Consider Before Taking a Loan