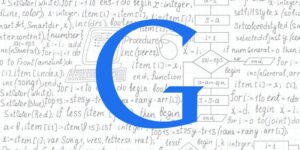 Have you ever heard a nerd try and explain how Google’s algorithm works? If so, I know your pain. I’m guessing the next time they invited you over, suddenly you had a root canal scheduled, right?

Google’s algorithm is something that impacts all of us. Almost four billion people are online, and around 70 percent of them are using Google. That means that almost half of the world use the algorithm – or the bigger question is, does it use us?

We’ve done our best to cut out the really nerdy parts and leave just enough meat to explain it and keep you entertained. So take a seat, this ride will be informative and a little less boring.

Yes, Google’s algorithm is seeing everything we do. Think of it as a Big Brother that loves you. The minute you open your computer and go online it starts collecting information. That’s because the algorithm is actually a mathematical equation that is fueled by artificial intelligence. It learns as you surf. It sees who you are and it knows what you are looking for. Sounds scary, right?

It kind of is, but many companies swear that they won’t let the authorities get their hands on your data. They just collect it for their own purposes, like advertising. Still, that information is being collected and it can be used against you. We are all now living in glass houses where people can and see everything you do.

But there are perks to this… You’re getting better advertising as a result!

There once was a time when grandmas got commercials about burgers and motorcycles. Sure that’s hilarious and full of irony, but anyone getting advertising today would not understand why that was funny. That’s because we no longer get advertisements that have nothing to do with us.

Let’s say you did go online to look for a new motorcycle. Afterwards, you start getting advertisements about motorcycles. That’s a nuts and bolts basic explanation about how the algorithm works. Sure it’s unsettling, but think of all the time it will save. You no longer have to see advertisements for things that have nothing to do with you. The algorithm is curtailing to you. That means you are getting more direct advertising about things you actually want.

Even social networks are using similar algorithms. Instagram, for example, will list your profile higher in the browse tab if you have a lot of followers and high engagement rates. Many business buy Instagram likes to take advantage of this method, and that’s how people are getting noticed.

Additionally, they can also be more direct towards what the consumer is looking for. Most of us want a really good deal. With Instagram, businesses can upload a photo with a graphic that informs followers of upcoming sales. That gives the consumer more direct information about how they can get their hands on a business’s product. So, savvy consumers can get the best value for their buck. This is how Instagram’s algorithm can benefit both the business and the consumer.

As things are right now, if you aren’t a drinker you won’t get advertisements for whiskey. Or at the very least, you’ll get less of them. The thing about the algorithm is that it needs a pair of human eyes and hands to help it learn. Every bit of information it learns is given to it by humans. Therefore, when it messes up it is usually due to human interference.

The way algorithms can and do collect data causes some unsettling concerns. But right now, what you buy cannot be used against you. So enjoy it while you’re free as who knows what A.I. Might do to us in the future!

5 Reasons Why Every Coder Should Know HTML And CSS