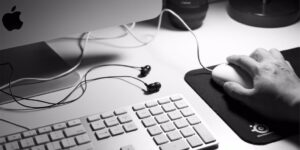 Web platforms meant for document conversion/processing are typically very user-friendly with a maximally de-bloated interface. Yet, they list a number of clearly distinguishable actions that can be performed with the documents. Selecting any of these actions takes you to the corresponding sub-platform which is adapted for the task required. For instance, the web page used for merging documents would normally have several boxes each of which would be clicked in order to upload a different document (the number of boxes can be changed as desired).

A compression tool, as expected, would require the original PDF and a parameter indicating the strength of compression or the estimated output document size. A really intuitive tool would offer instructions on how to compress a PDF right below the corresponding action buttons. These instructions are usually written as short and as clear as possible out of respect for the user’s time.

One more important aspect to mention is that some platforms allow performing multiple operations simultaneously. Thus, in the example with the compressions, a user would be able to add a list of files (however long) and hit the “compress” button performing the operations simultaneously for multiple documents. This is a particular time-saver when having multiple small documents, whose size needs to be optimized. In fact, if this option was absent, performing such operations would be so time-consuming that they would simply be avoided altogether.

Some services offer a choice of upload methods and a really intuitive user interface so that the desired file could be input using one of these methods:

After uploading the file, one would normally only have to launch the process by clicking the corresponding button (for instance, “Compress”). The files are uploaded to the server and the conversion happens there, taking advantage of the powerful computing resources that power the platform rather than performing the conversion locally, on the user’s device. Hence, the entire process is as fast as possible, does not overload your CPU (allowing other tasks to be executed), and does not actually depend much on the type of device used.

Finally, the output files are generated and one of the following happens:

Thus, the entire compression process can be carried in just a few steps and with very little effort.