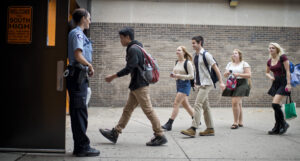 Recent school shootings have cast a pall over the entire educational system. The idea that parents have to worry more about the safety of their sons and daughters rather than what is being taught to them is something that would have been hard to believe a few decades ago. But it seems like every day brings another tragic story in the news, and parents are realizing that they can no longer sit back and not do anything about it. Even students have become energized to speak out about their safety. It certainly seems that we, as a society, have reached a tipping point where the issue will not simply go away and that something needs to be done about it.

safeof the conversation has centered on efforts at gun control. But the fact is that the laws in place are very difficult to change since they often require changing the minds of lawmakers who are firmly entrenched in their views. When you add in the pretty strong political pull of pro-gun lobbyists, it’s naïve to think that there will be drastic changes in gun laws anytime in the near future. That’s why many parents are realizing that the best chance for their kids to be safer in school will come via proactive efforts on the local level. And the most logical way for that to happen is for schools to invest in armed security to protect children from potential threats.

Once a school board makes this decision, it’s important that they seek out professionals with the kind of experience and wherewithal to handle this task of such importance. (Check out https://fastguardservice.com.) What they’ll find, for the following reasons, is that it’s the best choice they can possibly make.

Trained security professionals have often been in situations where active shooters have been involved. That allows them to assess a dangerous situation and handle it in a calm and calculated matter. This allows for the best possible outcome when a situation arises with the potential of a school shooting with multiple victims.

No Strain on Police

Many local schools might feel like the local police department might be a better answer. But the truth is that police department is often stretched thin the way it is. It is unrealistic to think that they will be able to spare officers on a regular basis, especially when the best possible dissuader of potential violence is to have an officer in the school all day long.

One of the other ideas that have been bandied about in the school safety debate is the possibility of arming teachers. But would you rather have a teacher with little to no experience shooting guns or a trained security professional if a school shooting is in play? That doesn’t even take into account liability issues if there should be an accident involving an armed teacher.

When all the options are weighed, a security agency in charge of the safety at a local school seems like the best selection. It might be the only way for parents to have any kind of peace of mind when they send their kids to school.

When is the Right Time to Invest in Property?