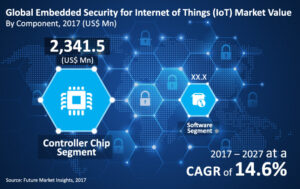 The introduction of Internet of Things (IoT) had necessitated the need of encountering the third wave of hacking. This wave not only encompassing wired computers & networks but also intelligent devices such as medical devices, Supervisory Control and Data Acquisition (SCADA) systems, printers, routers & switches, and wireless phones. This hacking wave is pegged to bypass the “street-creed” amateur phase, moving directly to massively coordinated, well-honed sophisticated attacks.

War Driving – The Most Common Attack on IoT

It has now come to light that this third wave of hacking may include terrorist cyber-strikes on industrial infrastructure (“smart grid”) and utility. War driving is the most common attack on IoT, wherein hackers drive around neighbourhood, hunting for wireless nodes that are not secured. Another challenging area where embedded security requires great attention is in-vehicular security. From the time of installation of electronic devices into cars, they have always been feasible targets for spiteful attacks or manipulations. Tachometer spoofing, unauthorized chip tuning, or mileage counter manipulation are already common. Most of the available automotive communication systems therefore are virtually unsecured in case of malicious encroachments.

Extracting Secret Information- A Primary Target for Systems under Attack

Introduction of computing, and IoT has resulted into an increased attack on software, hardware, data, and network. Several embedded systems are particularly susceptible to non-invasive attacks, known as side-channel attacks. Non-invasive techniques include software attacks, and attacks on the basis of statistical analysis of a device’s operational characteristics for extracting secret information. When a system is under attack, extracting secret information becomes the primary target, and then the systems are put out of order. IoT mostly comprises of interconnected devices which have limited processing power. With attackers becoming sophisticated, dedicating an entire co-processor possessing high scalability becomes necessary for offering complete security features required by an embedded system. Reducing susceptibility to side-channel strikes is imperative by using hardware techniques for reducing correlation between data values and side-channel information such as time and power.

The global embedded security for internet of things market is projected to register a staggering 14.6% CAGR through 2027, according to a report by Future Market Insights (FMI). Various organisations promoting best practices for implementation of IoT solutions have provided guidelines for adopting and implementing necessary security solutions so as to prevent such attacks. One such guideline is implementing embedded controller chipsets. These chipsets are specifically designed to work with a group of microprocessors, and play an indispensable role in determining system performance. Surging utilisation of chipsets for ensuring protection against cyber-attacks is likely to propel growth of the global market for embedded security for IoT in the near future.

Growing adoption of IoT across the globe is resulting into numerous connected devices, exchanging and communicating data seamlessly with each other. IoT network-connected devices are utilised across sectors such as agriculture, retail, industrial automation, healthcare, and smart cities. Increasing number of IoT-enabled connected devices is expected to drive demand for hardware security solutions. A new trend observed currently in the market includes rising focus on security’s component aspect, which in turn, is expected to drive the market growth in the upcoming years.

Top 5 Must Haves For Flipping Homes In NYC

How to Get More Social Shares On Your Blog Content