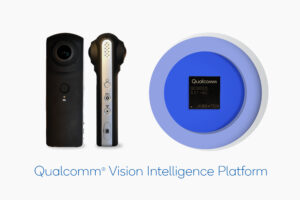 One of the interesting things that came out this month is the Qualcomm Vision Intelligence platform. What makes this interesting is that it is basically an AI platform that can be put into the camera itself. I spent the morning looking at the demonstrations and think that this may represent a major change with regard to how security cameras and IoT devices in general are likely to evolve going forward.

Let’s talk about where this platform is, why it is so important to have the intelligence in the cameras, and finally how this will evolve.

This platform is out in trial and being integrated into cameras that aren’t yet in market. It’s capabilities, while impressive, are still in their infancy. What they were able to demonstrate was facial recognition allowing the camera to identify and track faces (but not recognize who the people were); object recognition from a database (people vs. other objects), stitching (taking multiple cameras and creating a near seamless panoramic video feed), and cross camera tracking while stitched.

Traditionally these capabilities would be done in the cloud because the cost and power needed to do this in a camera, until now, has been simply too high. Qualcomm has brought the cost in funds and power down to where it can be done in the camera which is impressive given the demonstration cameras were 4K.

High definition video streams are bandwidth hogs and particularly in large enterprise or public-sector security camera installations you simply don’t have the bandwidth. This typically forces you to reduce massively either the resolution or the coverage. This is so that the implementation will work leaving blind spots or resulting in video that is too grainy to be useful. I’ve run several security shops over the years as well as my own cameras and, sadly, often the cameras did better as a visual deterrent than they did to catch a thief (there is nothing more annoying than to catch the car but not be able to read the license plate).

By doing the processing in the camera you can limit dramatically what has to be sent. In a home security camera, you only want to send images of people and don’t want to get notified every time your local squirrel gets your dog worked up. In a big installation this is massively more problematic because you really only want to track people doing things they shouldn’t be doing and filling up your available bandwidth (it is not unusual to have security cameras on their own dedicated high-speed network).

Security personnel are not only typically underpaid they are also undertrained and ill-equipped, something I’ve always thought was penny wise and pound foolish given the value of what they are protecting. The result is that the more intelligence you can put into the security system the better the overall result will be. (I had two guards on two different occasions play with their guns in the bathroom resulting in unplanned discharges and big holes in lots of walls. I stopped being a fan of armed guards as a result).

Now there are two critical things these intelligent cameras can’t yet do effectively. One is to identify individuals real time and the other is to track across a camera network. Both are problematic for endpoint intelligence. The first because they must have real time access to a database of images and typically a far more powerful facial recognition program. The second is because, once someone is identified on campus, the information defining them has to be passed across the network to all cameras real time, so they can be tracked. This requires a heavy back end and far more network traffic than just object recognition which can be kept local. However, as memory gets cheaper you could certainly push inference images of the employees and authorized personnel out to the cameras and then alert when someone shows up not identified. You could then, on the back end, stitch together across a timeline automatically the movements of these unauthorized people.

Going forward you could also Geofence by only placing the images of people that were authorized in a particular area on cameras covering that area. If an employee shows up that isn’t authorized, the camera could then send out an alert that would not only notify security but would de-authorize their image across campus, so all the cameras would treat them as an intruder. Then you would again stitch their images across cameras to determine if they just got lost or were up to something nefarious.

Given much of this would reside off camera my expectation is that the emerging implementations will be a mix of camera and cloud-based intelligence. This mix will continue to shift towards the cameras as bandwidth becomes more constrained, and both memory becomes less expensive and the systems more intelligent until it reaches a new equilibrium I’d say around 2021-2025.

We talked about how important it is to have both high resolutions and unconstrained bandwidth. We then talked about how this technology would evolve to allow a security camera implementation to granularly track individuals and things like cars across large geographic areas. And we discussed how this would evolve into a blended cloud IoT implementation, so the total solution could meet the needs of today though likely not fully until next decade (the back end still needs to be developed and the end points still need to evolve).

But this idea of endpoint intelligence going beyond cameras and security to the entire emerging market of IoT. This is both because bandwidth constraints are pretty much universal and the need to push intelligence to the edge is not a tech firm mantra. Cameras may be the low hanging fruit because, particularly the 4K versions, are such bandwidth hogs but medical equipment, manufacturing line equipment, and event lighting and HVAC are all advancing to consume ever more bandwidth and resources. Offsetting this is end point AI and, I expect, we are going to be up to our armpits in it in a few short years.

In the end this is just another indication that next decade’s innovations will make this decade’s revolutions look pale by comparison.

How Does A Good Mattress Alleviate Pressure Points Pain?