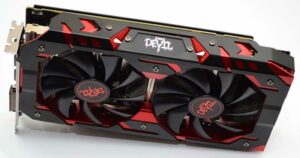 Increasingly it is a pain in the butt to change between graphics card vendors. You have to make sure you uninstall the competing drivers, ideally before you put in the new graphics card, and if you have a monitor that uses the syncing technology for the old vendor you have to disable that or buy a new monitor that supports the graphics vendor’s sync stuff. Staying with the same vendor is more a matter of installing the card and updating the drivers. That means if you were NVIDIA you’ll likely stay NVIDIA and if you were AMD you are likely to stay AMD.

In addition, much of the graphics card bragging rights are with cards most folks don’t buy. The nose bleed cards in the $500-$1,000+ category. The cards most folks buy are closer to $200 and, at that price you can actually buy a pretty decent card. This is mostly where AMD’s RX-500 line resides. But it is a minor upgrade to their old RX-400 line so it really targets folk’s way back on the 300 series or that have integrated graphics they aren’t very happy with. (Integrated graphics suck).

This means you mostly want to look at these new cards as a great value for those currently running machines with graphics cards from AMD that are two versions back or systems that are using integrated graphics.

Let’s talk about some of the highlights.

This is a card for those on a budget, whose graphics needs are modest, and who are currently not happy with integrated graphics. For those that still run media centers this is likely the card for you as well (are there any of you left?) and it prices in at just under $80 and doesn’t require power wiring (it pulls power from the card socket). This makes it particularly easy to install on a pre-built system that has the card slot but doesn’t have the power cabling or power headroom that graphics cards typically require. It also makes for a much cleaner implementation if you have a windowed case, but this is pretty weak card for a typical system build. It might, however, be a cool addition to a small windowed office desk PC and a cheap way to do a custom build for one. And, for a really cheap card, it benchmarks surprisingly well.

This card is huge boost in performance and $20 more and I have no idea what the person looks like that is unwilling to pay $20 for a big bump the performance over the RX 550 and, I expect, the decision will come down to whether you can power the 560 card or not. The 550 goes where the 560 can’t but if you can take the 560 the $20 extra cost is more than worth it because the 560 if far faster. You end up with a much bigger performance boost and the extra cost is negligible as you are still under $100 before taxes.

This is the card were you likely get the biggest bang for the buck. Granted it is about $70 more than the 560 but this is truly a decent graphics card and the only card that is nearly 3x the card it is supposed to replace (the RX 370). This is the card most folks would likely be happiest with and the next card up, the 580, is just moderate boost over this one. If you have the power headroom to run it this is where my recommendation would likely lie if you are upgrading from any 300-series card and are on a tight budget.

Having said that the upgrade to the top of the line is between $20 and $100 depending on the memory and configuration. Most folks won’t use the extra memory of the more expensive card; however, I am one of the folks that likes windowed showcase builds and will pay for appearance.

Tests have shown around a 5-10 frame per second difference (and we are already talking frame rates that are 40+) in test titles between the 570 and 580. So, you might notice the difference between baseline 570 and 580 cards, and then again, you might not. That still leaves me thinking that the 570 may be the sweet spot in this line. One other point, if you want to do VR the 580 still sits at the bottom of the minimum specification so that $20 may buy you the headroom you may need in the future. So, were it me, even though I think the 570 is the best deal, I’d pay the extra $20 and get the 580. And clearly (see below) this was the configuration I ended up with.

If you want more performance from AMD, like everyone else, you’ll have to wait for the Vega cards due later in the year.

This new 500 line is basically updated RX 400 cards so if you have the last generation you can save your pennies. Some folks have reported they’ve been able to flash their RX 400 cards with RX 500 firmware and get RX 500 features and performance (but some of these folks have also reported this has resulted in some instabilities so do so at your own risk). Currently the difference in prices between the RX 400 and 500 is negligible so you might as well get the 500 over the 400 until vendors start blowing out 400 inventory and then, the 400s might be a steal in the future.

If you are on NVIDIA these cards won’t tempt you to move but they are likely enough to hold you on AMD if that is the platform you have chosen. AMD drivers have improved a lot over the years and these cards do come with a new feature called Radeon Chill which alters frame rates based on how you are playing the game and should result in lower energy use and heat.

As far as the best-looking card for a showcase build, of the cards I’ve seen, it is the PowerColor Red Devil RX 580 8GB card which is selling for around $270 (you pay a premium for appearance). But it looks like a high-end card, has decent LED lighting and it says “Devil” on the edge, and has a decent built in cooler for overclocking. That’s the one I’m using on my latest build (I swapped out the MSI 480 card).

Given winter here in the North West doesn’t seem to want to leave, it is nice to do a system build or a system update over the weekend and get some decent performance at a bank account friendly price.

Credit Cards are tempting, but try to avoid them.