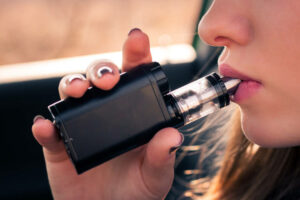 Are you among the millions of smokers that are still on the fence about vaping? The 2016 National Health Interview Survey (NHIS) found that 15.5% of U.S. adults smoked cigarettes. It was a significant decline from the 20.9% of people who smoked in 2005.

So what happened to the roughly 13 million smokers? It’s a combination of things. Some people have quit smoking outright. Far fewer high schoolers are picking up the habit compared to years past. And many smokers have switched to vaping. As of 2016, 3.2% of adults in the U.S. use e-cigarettes. Nearly a third of those people were former cigarette smokers.

Over 2.3 million former smokers have discovered there are a number of key differences between smoking cigarettes and vaping.

One of the most obvious distinctions between smoking and vaping is the flavor selection. Cigarettes come in two flavors: tobacco and menthol.

E-liquid manufacturers have proven that the flavor options are endless with vaping. Quality e liquids provide an abundance of flavor using a combination of natural ingredients. There are standard flavors like tobacco and mint that former smokers are familiar with. You’ll also find every fruit under the sun and replicas of popular candies. Whatever your favorite flavor is you can probably find it in e-liquid form.

Because vaping involves heated aromatic liquids rather than burning tobacco the smell is very different compared to smoking. Many people can’t stand the pungent, lingering smell of burned tobacco. The smell of vaping varies depending on the e-liquid used, but most people consider it to be fairly pleasant.

Vaping can produce the same amount of smoke as cigarettes or a whole lot more. Because the coils can be adjusted the amount of vapor that’s produced can be increased or reduced. The e-liquid can also make a difference in the amount of smoke produced. Some vape users take pride in how big they can get a cloud and contests are held around the country. If you don’t mind (or prefer) clouds of smoke vaping is the clear winner.

A cigarette is very straightforward. You light the end of it and inhale. There’s not much in the way of customizing the experience.

Vaping, on the other hand, can be extremely personalized. From the e liquids to the battery to the tank itself give vapers complete control. You can adjust the throat hit and how much smoke is produced each time you vape.

One important type of vaping customization is the level of nicotine consumed. Smokers have no control over how much nicotine is in cigarettes. Vapers can choose their nicotine level, which is contained in the e-liquid.

The level of nicotine contained in e-liquid can range from 0mg up to 42mg. Many smokers begin vaping as a way to reduce the amount nicotine they consume on a daily basis.

Cost is another factor that’s convincing some cigarette smokers to switch to vaping. The initial startup cost is higher with vaping because equipment has to be purchased. A standard starting kit is typically around $40-50. After there you’ll have to re-purchase e-liquid and cartridges. If two cartridges a day are used the cost of vaping will be around $1,500 annually.

The cost of cigarettes varies significantly depending on location. This is because state and local taxes add to the price of a pack of cigarettes. A Marlboro pack-a-day smoker will spend roughly $2,650 a year.

More and more public places are beginning to ban smoking. Concerns over the effects of second-hand smoke, fire, and cleanliness have prompted a ban on smoking indoors in basically every public setting. Many homeowners and landlords also don’t allow smoking indoors because of the smell and potential for a fire. This is also good idea to invest in vape stocks.

This App will Pay Strangers $1,000 to Get you Hitched

The challenges of wine auction houses: The Baghera Wines case